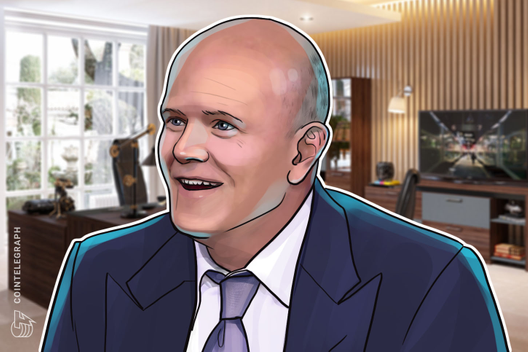 The Galaxy Digital co-founder says the coming twelve months will prove bullish for Bitcoin, which has room to almost double its current levels.

Bitcoin (BTC) will hit $12,000 in 2020 as markets recover from fresh suppression, one of its most outspoken investors has said.

Mike Novogratz, co-founder of cryptocurrency merchant bank Galaxy Digital, made the “$btc finishes over 12k,” remark as part of his new year predictions in a tweet on Dec. 28.

Novogratz bets on Trump and BTC

As Cointelegraph reported, Trump is a critic of cryptocurrency, in July making public statements about Bitcoin’s allegedly dubious nature.

Novogratz added that if Trump won, he would honor a bet he made with another Twitter user worth a princely single unit of largest altcoin, Ethereum (ETH) — around $130.

How bullish is too bullish?

Novogratz has had a mixed run when it comes to Bitcoin price predictions in 2019. Throughout the year, he rode sentiment to suggest a continuation of bullish performance.

In early May, when BTC/USD traded at around $6,000, he said he envisaged the pair topping $20,000 for a second time at some point in the following eighteen months.

While the latest pledge seems to tone down the enthusiasm, Novogratz is not alone in believing major changes will take place next year in the market.

As Cointelegraph noted, various technical metrics now point to the fact that Bitcoin has already begun a bullish shift — even as prices remain at around $7,000.

Others, meanwhile, have refused to stop at a $12,000 end-of-year valuation. Earlier in December, infamous Bitcoin bull John McAfee once again claimed that by 2021, Bitcoin would be worth $1 million.

In an ironic twist, McAfee added he would stop devoting so much time to cryptocurrency promotion in order to run for president alongside Trump — despite claiming he had no chance of winning.