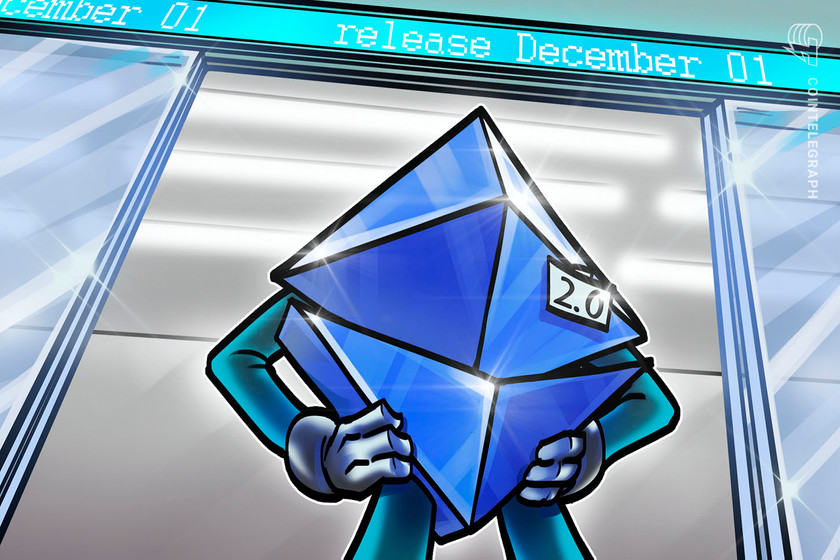 The Ethereum 2.0 deposit contract is open. How are things progressing, and what comes next?

On Nov. 4, Ethereum (ETH) core developers hit a significant milestone. In a “quick update” on the Ethereum Foundation blog, developer Danny Ryan confirmed the release of the v1.0 specs for the hotly anticipated Ethereum 2.0 upgrade, which includes the mainnet deposit contract address. Anyone who wants to participate as a validator on the Ethereum 2.0 mainnet can now start depositing their minimum stake of 32 ETH.

The initial results looked promising, with 14,000 ETH (worth around $5 million) staked in the first eight hours alone. However, the developers have set a minimum total stake of 524,288 ETH from 16,384 validators as the trigger for launching the mainnet, known as the beacon chain. The target must be met at least seven days beforehand, so by Nov. 24. If this doesn’t happen, the launch will take place seven days after the minimum staking threshold is met.

Is the Dec. 1 deadline achievable?

At the time of writing, less than 20% of the total amount has been staked. If staking continues at the current rate, the Ethereum 2.0 mainnet will launch not on Dec. 1, but in the early weeks of 2021.

Of course, the participation rate could change. As Nov. 24 draws closer, the growing anticipation may encourage more people to stake their ETH. Ben Edgington, the lead product owner at ConsenSys Quorum Protocol Engineering advising on Ethereum 2.0 development across the ConsenSys organization, maintains a positive outlook on the Dec. 1 launch date, telling Cointelegraph:

“I expect that the pace of deposits will accelerate sharply as the cut-off date nears. There’s little benefit in staking early, so I think people are just taking their time. Whether there will be enough to push us over the threshold in time is hard to judge, but I remain optimistic. If there is a delay to genesis, I expect it to be short.”

The numbers show that the potential is there, as the number of addresses holding 32 ETH hit an all-time high of 126,852 in the hours following the news. This means that fewer than 13% of addresses need to participate to hit the threshold.

Whether the beacon chain launches on Dec. 1 or in the weeks following, there won’t necessarily be any “big bangs” to look forward to on the launch. The role of the beacon chain is to secure transactions on shard chains, which won’t be available until later. The current Ethereum 1.0 mainnet will continue running as it does now.

The road to sharding

So what are the next steps, and when can Ethereum become fully scalable? The beacon chain launch is known as Phase 0 on the Ethereum 2.0 roadmap. The next significant developments are slated for 2021 and will involve the launch of 64 shard chains, which will operate under the proof-of-stake consensus validated by those who staked ETH. However, in their initial state, shard chains won’t support smart contracts or user accounts.

Perhaps the most significant milestone for the existing Ethereum 1.0 ecosystem will be Phase 1.5, when the Ethereum mainnet joins the beacon chain as a shard chain. This will mark the transition of Ethereum to a full proof-of-stake consensus. Again, it’s set to happen in 2021, but no exact date is available as of yet.

Only when the final stage of Phase 2 comes around will it be possible to assess the full effect of the Ethereum 2.0 upgrade on the network’s scalability. At this time, shards will be fully operational, supporting smart contracts and all transaction types. However, this could be as long as two years away. On the roadmap, the Ethereum Foundation states, “Phase 2 is still very much in the research phase,” effectively confirming that development isn’t yet underway.

No solution to rule them all

Even if all the roadmap phases are delivered within the next 18 months, which is a big “if,” it will be well into 2022 before the full scalable potential of Ethereum 2.0 is visible. However, rather than focusing on the development of Ethereum 2.0 as the endgame, it’s worth taking a bird’s eye view on the evolution of the Ethereum ecosystem over the coming years.

Despite coming into some criticism, layer-two solutions still offer the best hope of Ethereum scalability in advance of the Ethereum 2.0 mainnet becoming fully operational. Even Vitalik Buterin himself appears to favor other layer-two platforms as the current scaling solution of choice.

This year, both Matic Network and the OMG Network unveiled layer-two solutions based on variations of Plasma, which makes use of side chains to take processing load off the main Ethereum chain.

However, while Plasma was the scaling technology of choice for a while, the focus for much of this year has been on rollups, a solution also endorsed by Vitalik Buterin. Additionally, privacy protocol Aztec has launched private smart contracts based on zero-knowledge rollups. Zero-knowledge rollups bundle transactions together using zero-knowledge proofs to verify validity.

Another type of rollup, called optimistic rollups, is also in development by several projects. Optimistic rollups use game theory to avoid the need for the heavy computational load required by zk-Rollups. Erick De Moura, founder and CEO at Cartesi, explained to Cointelegraph how he believes rollups outperform Plasma-based scaling solutions:

“Rollups solve a huge problem that is inherent to Plasma — data availability. With rollups, all transaction data is bundled, or rolled up, and made available on Ethereum in a way that’s cheaper than it would be for regular blockchain-based transactions. Besides, all the entailed computation load is done off-chain, making for large gains in throughput and transaction cost-efficiency.”

Cartesi is set to launch its own version of optimistic rollups on its testnet during early 2021. The launch will come with a Linux-based infrastructure, effectively making a scalable version of Ethereum available to developers used to mainstream standards.

It’s worth pointing out that the arrival of Ethereum 2.0 won’t negate the development efforts of the layer-two platforms currently attempting to solve for scalability. Instead, technologies such as rollups or side chains will continue to help Ethereum 2.0 scale beyond its renewed capacity once sharding is fully implemented.

So, strap in and settle down for a long ride. Ethereum 2.0 may be gearing up for an initial launch, but it’s still only the first of many steps on the long road to scalability. The ongoing development of layer-two solutions means there’s plenty of company along the way.