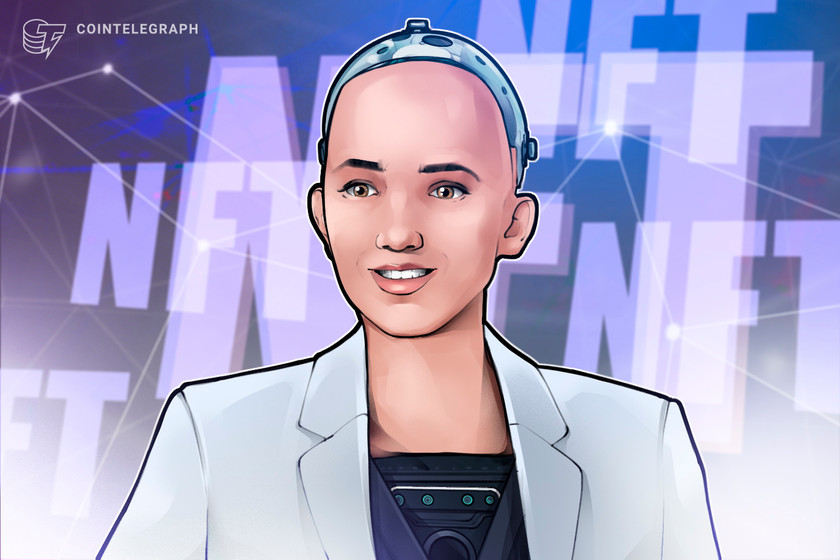 The popular humanoid robot will become the first artificially intelligent being to create nonfungible token-based artworks.

The booming nonfungible token space is about to experience another expansion, with Sophia the Robot set to auction its own NFT digital artwork.

According to an announcement on Monday, the social humanoid robot will hold an NFT auction via the Nifty Gateway platform on Mar. 23.

Sophia’s NFTs are reportedly based on the works of artist Andrea Bonaceto with IV Gallery — a Los Angeles-based gallery — in charge of curating the collection.

As part of the Mar. 23 auction, multiple artworks from the NFT collection will be showcased on Sophia’s and Bonaceto’s social media channels.

Commenting on the creative process behind Sophia’s interpretation of Bonaceto’s art, David Hanson, creator of Sophia the Robot told Cointelegraph:

“We fed Andrea’s works into Sophia's own neural networks, along with many of Sophia's latest paintings. Subsequently, she generated a powerful series of new images, which she then rendered both digitally and as brush strokes, which she painted with her own hands.”

According to Hanson, during the iterative process of developing the artworks, Sophia’s paintings began to develop a “unique personality” that also resonated with Bonaceto’s art.

According to the announcement, the upcoming NFT drop on Nifty Gateway is only the first in a series of digital art-related endeavors for Sophia. Hanson Robotics and SingularityNET — a decentralized AI firm — will partner to create Sophia Collective.

For Hanson, Sophia Collective is an important step in creating a global community for open-source collaboration in AI-oriented digital art.

The popularity of NFTs continues to expand even outside the crypto space with artists and musicians getting in on the hype. Earlier in March, the Kings of Leon tokenized an album, raising over $1.45 million in the first five days of its sale.

Such is the extent of the frenzy that MoonCats, a long-dormant NFT collectibles series, has recently been “resurrected.” Meanwhile, the mania is also attracting critics who point to the carbon footprint of NFT minting.