Elon Musk loses $20B since SNL, as Michael Saylor comes out firing 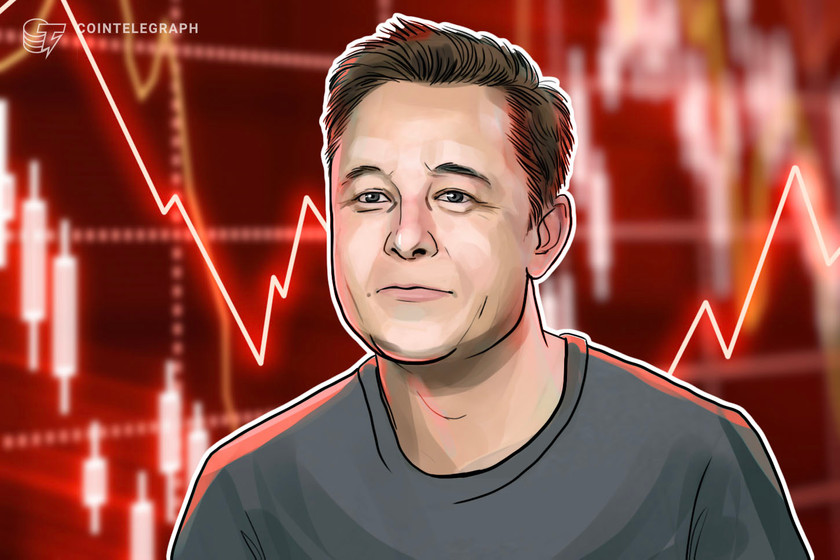 Tesla stock has dipped 14% since Elon Musk appeared on SNL, with Musk estimated to have lost $20 billion in that time frame.

Elon Musk has reportedly lost $20 billion since his May 8 appearance on Saturday Night live, as the news of Tesla halting BTC payments for cars continues to send shockwaves across markets.

On May 7, the day before Musk made his appearance on SNL, Tesla stock was sitting at $669. In the week since the stock has declined 14% to sit around $573. According to Forbes estimates, this sudden drop has seen Musk’s $166 billion net worth plunge by $20 billion down to around $145.5 billion.

The 14% drop this week adds to an overall downward trend for Tesla stock over the past 30 days. On April 14 TSLA shares were sitting at $784. Today's price of $573 marks a 26.91% decrease over this period according to data from Tradingview.

Musk’s escapades aren’t just causing volatility in Tesla stock prices of course, with Bitcoin’s price declining 8.1% from $54,448 when he dropped his BTC payments bombshell on May 13, down to around $50,000 currently, according to Coingecko.

He noted that Tesla made a $300 million profit from selling a portion of its Bitcoin, which dramatically improved its Q1 bottom line. “So obviously, they use Bitcoin to deliver a very important quarter for them,” he said. “So you can’t have it both ways. You can’t say Bitcoin’s not good for me. So Bitcoin doesn’t need Tesla.”

MicroStrategy CEO Michael Saylor also came out firing, taking on Musk on Twitter about the billionaire’s claims Bitcoin is not environmentally friendly.

The estimated electricity consumption per https://t.co/Lj4SMIkLS8 YTD increased 40% during the same period that the network grew 100% in assets, meaning that energy efficiency dramatically improved during this time period. #Bitcoin is becoming less energy intensive as it scales.

Musk posted links to articles which referenced “dirty coal” Bitcoin mining operations such as the plant in Xinjiang which was temporarily shut down for safety checks last month — resulting in a sharp drop in the hash rate of China’s top mining pools. The links also point to the controversial expansion of Greenbridge’s gas-fired Bitcoin plant in New York.

Saylor fired back by arguing the cost of Bitcoin was worth it for the benefits:

“Bitcoin offers 8 billion people a superior technology to guarantee their human rights to property, as well as a solution to the global problem of inflation & currency devaluation which creates $10+ trillion in economic damage per year. Isn't the fossil fuel mix second order?”

Saylor might be more upset than most as he was reportedly instrumental in convincing Musk to add $1.5 billion BTC to Tesla's balance sheet in the first place.

MicroStrategy took advantage of the dip caused by Musk’s announcement yesterday to spend another $15 million buying 271 BTC taking its total haul to 91,850 BTC.

Hope for the future?

Not everyone saw Musk’s actions in a negative light. The CEO of investment firm Skybridge Capital, Anthony Scaramucci suggested that this was part of Musk’s plan to help clean up Bitcoin mining by encouraging it to move to 100% renewables.

“Elon’s goal: level set the Bitcoin community and focus policymakers on the urgency for clean energy mining. The path to $1 million BTC and hyper-bitcoinization demands renewable mining. Elon will contribute mightily in this regard. He’s HODLing.”

He wagered 500,000 Satoshis that Musk would enter the “super clean” Bitcoin mining market.

Elon is not a half measures guy. I predict he will become a competitor/disruptor in the Bitcoin mining industry. I wager 500k sats that, within a year, Tesla/Solar City will announces its entry into “super clean” bitcoin mining.