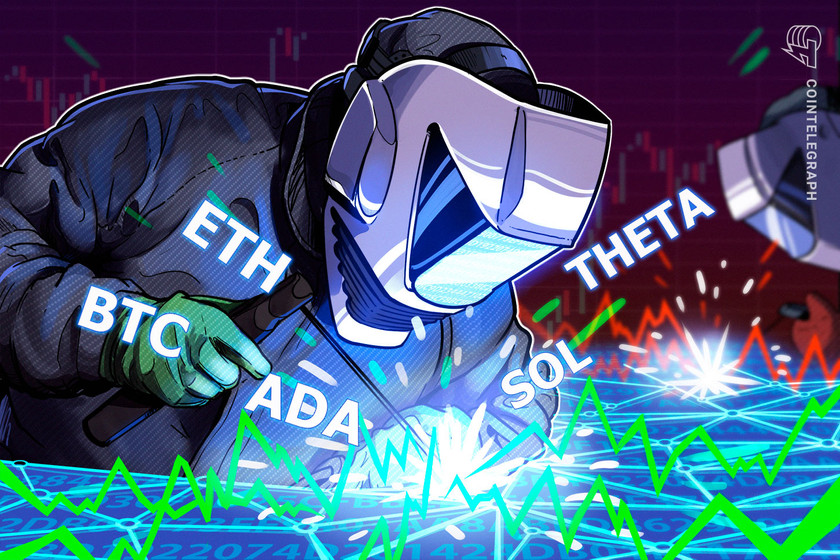 Bitcoin is on the verge of a trend defining move and if bulls succeed, ETH, ADA, SOL and THETA could rally higher.

When the sentiment in the market turns bearish, every bit of negative news, however insignificant, pulls the price down as traders panic sell. This is what happened after China’s social media giant, Weibo, suspended a number of crypto-related accounts and triggered fears that a wider crackdown could occur.

In other news, a note from Goldman Sachs said their meetings with 25 chief investment officers of long-only and hedge funds revealed Bitcoin (BTC) as the least favorite asset for investment.

While the news may be negative in the short term, it is unlikely to change the long-term story of Bitcoin. As the price corrects, several institutional investors are likely to consider crypto investments to hedge their portfolio against the possible surge in inflation in the United States.

From the perspective of most traders, Bitcoin's current decline continues to represent a buying opportunity for the longer term.

Let’s analyze the charts of the top-5 cryptocurrencies that may outperform in the next few days.

Bitcoin turned down from the 20-day exponential moving average ($39,127) on June 3 but is finding support near the trendline of the triangle. This shows that bulls are buying on dips, and bears are selling on rallies.

The next trending move is likely to start after the price escapes from the triangle. If the bulls propel and sustain the price above the resistance line, the BTC/USDT pair could rally to the 50-day simple moving average ($47,198) and then to the pattern target at $52,622.90.

On the contrary, if the price turns down and breaks below the trendline of the triangle, it will suggest that supply exceeds demand. That could result in a drop to the $30,000 to $28,000 support zone.

If this zone cracks, the selling could intensify as several traders who bought recently may exit their positions. That may pull the price down to $20,000.

The moving averages on the 4-hour chart have flattened out, and the relative strength index (RSI) is oscillating roughly between 40 and 60, indicating an equilibrium between buyers and sellers.

However, this state of uncertainty is unlikely to continue for long and the price is likely to break above or below the triangle in the next few days. If the price breaks out and sustains above the triangle, it will suggest the setup acted as a reversal pattern.

Conversely, if the price breaks below the triangle, it will suggest that the current consolidation was a temporary halt in a strong downtrend. It is difficult to predict the direction of the breakout, hence traders may wait for the break to happen before considering fresh positions.

Ether (ETH) turned down from the 50-day SMA ($2.908) on June 4 and re-entered the symmetrical triangle. However, the positive thing is that bulls did not give up much ground, indicating strong buying near $2,550.

If the buyers drive the price above the resistance line of the triangle, the ETH/USDT pair may again challenge the 50-day SMA. A breakout and close above this resistance could clear the path for a move to the 61.8% Fibonacci retracement level at $3,362.72.

Contrary to this assumption, if the price turns down from the 50-day SMA once again, it will suggest that bears are defending the resistance aggressively. A break below $2,550 could pull the price down to the support line of the triangle. A break below the triangle will be the first indication that the bears are back in the driver’s seat.

The 4-hour chart shows the formation of an ascending triangle pattern that will complete on a breakout and close above $2,906. If that happens, the pair could rally to $3,600 and then to the pattern target at $4,083.26.

This bullish view will invalidate if the price turns down and breaks below the trendline of the triangle. The bears will then try to pull the price down to $2,200 and then to the critical support at $1,728.74.

Cardano (ADA) has been stuck in a large range between $1.94 and $1 for the past few days. The altcoin turned down from the resistance on the range on June 4 and has dropped to the moving averages.

The bulls are currently attempting to defend the zone between the 20-day EMA ($1.66) and the 50-day SMA ($1.55). If the price rebounds off the current levels, it will suggest the sentiment is turning positive and traders are buying the dips to the moving averages.

A breakout and close above $1.94 will indicate the bulls are back in the driver’s seat. If the price sustains above this level, the ADA/USDT pair could retest the all-time high at $2.47. A break above this resistance will indicate the start of the next leg of the uptrend.

This positive view will invalidate if the pair turns down and breaks below the 50-day SMA. The bears will then try to pull the price down to the $1.33 to $1.22 support zone.

The 4-hour chart shows the formation of an ascending triangle pattern that will complete on a breakout and close above $1.94. This bullish setup has a target objective at $2.88. However, it is unlikely to be a straight dash to the target because the bears may mount a stiff resistance at the current all-time high at $2.47.

The 20-EMA has started to turn down and the RSI is just below the midpoint, suggesting a possible drop to the trendline of the triangle. A break below this support will invalidate the bullish setup and that may result in a drop to $1.36 and then to $1.

The bears are attempting to stall Solana’s (SOL) relief rally at the 61.8% Fibonacci retracement level at $43.38. However, the sellers haven’t been able to sink the price below the 20-day EMA ($36.39), which indicates the sentiment has turned positive.

VORTECS™ data from Cointelegraph Markets Pro began to detect a bullish outlook for SOL on June 1, before the rally picked up momentum..

As seen from the chart above, the VORTECS™ Score for SOL flipped green on June 1 when the price was close to $32.10.

The VORTECS™ Score has consistently remained in the green since then and the price of SOL has rallied to $43.33 today, recording a 35% gain in five days. This shows how the VORTECS™ Score gave an early indication of a counter trend rally even as other tools would have been bearish.

The SOL/USDT pair rebounded off the 20-day EMA on June 4 and has bounced off the 50-day SMA ($39.42) today. This suggests the bulls are not waiting for a deeper correction to buy.

If buyers drive the price above $43.38, it will indicate the downtrend is over. The pair could then rally to the 78.6% retracement level at $49.97 and then to the all-time high at $58.38. The 20-day EMA has started to turn up and the RSI is in the positive territory, suggesting the buyers have the upper hand.

This positive view will invalidate if the price turns down and slumps below the trendline. The pair could then decline to $25.58 and later to $21.

The moving averages on the 4-hour chart have turned up and the RSI is trading in the positive territory, suggesting the bulls are making a comeback. The up-move may pick up momentum if buyers thrust the price above $43.38.

Conversely, if the price turns down and breaks the 20-EMA, it will suggest that supply exceeds demand. The pair could then drop to the 50-SMA and then to the trendline. A break below the trendline will indicate that bears are back in the game.

THETA is trading inside a descending channel. The bulls attempted to push and sustain the price above the resistance line of the channel on June 4 and 5 but failed. This suggests the bears are defending this resistance aggressively.

However, the 20-day EMA ($8.19) has started to turn up and the RSI is in the positive territory, indicating the bulls have a slight advantage. If the THETA/USDT pair rebounds off the 20-day EMA, the buyers will make one more attempt to propel the price above the channel.

If they succeed, it will suggest the downtrend could be over. The pair could then start an up-move to $13 and later to the all-time high at $15.88. This bullish view will invalidate if the bears sink and sustain the price below the 20-day EMA. Such a move could result in a decline to $6.

The 4-hour chart shows the pair has turned down from the resistance line of the channel on two occasions. However, the bears have not been able to sink and sustain the price below the 20-EMA, indicating demand at lower levels.

If the pair rebounds off the current level, the bulls will make one more attempt to push the price above the channel. If they manage to do that, the next leg of the uptrend may begin.

On the other hand, if the price breaks below the 20-EMA, the pair could slide down to the 50-SMA. A break below this support will suggest the start of a deeper correction.