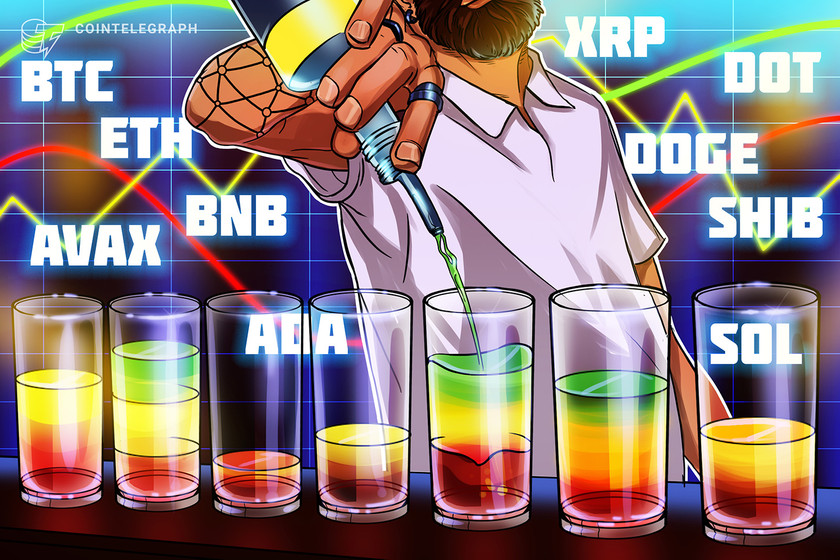 Bitcoin and most major altcoins are attempting a recovery, but higher levels are still likely to attract strong selling.

Bitcoin (BTC) dropped below $56,000 on Nov. 19, completing a near 20% correction from the all-time high. The Crypto Fear & Greed Index, which remained in the greed zone for most of the past two months, has plummeted into the fear category with a reading of 34.

Cryptocurrency research firm Delphi Digital said in a recent report that the sell-off in Bitcoin was “largely driven by a wave of liquidations rather than a fundamental shift in narrative,” and the analysts expect the drawdown to be “relatively short-lived.”

The recent correction does not seem to have shaken the long-term holders. According to the Hodl Waves metric, the supply held by investors who purchased over the past 6-to-12-month period has soared to 21.4% as of Nov. 17 compared to 8.7% at the start of June.

Could lower levels attract strong buying, resulting in a sharp recovery or will bears sell on rallies? Let’s study the charts of the top-10 cryptocurrencies to find out.

Bitcoin bounced off the 50-day simple moving average ($59,718) on Nov. 17 but the failure of the bulls to push the price above the 20-day exponential moving average ($61,696) indicates that buying dries up at higher levels.

The BTC/USDT pair plunged and closed below the 50-day SMA on Nov. 18. The moving averages are on the verge of a bearish crossover and the relative strength index (RSI) is in the negative territory, indicating that bears have the upper hand.

If bulls fail to push and sustain the price above the moving averages, the selling may intensify and the pair could drop to the $52,500 to $50,000 support zone.

The bears could not sustain the selling pressure at lower levels, which may have attracted strong buying from the aggressive bulls. The bulls have pushed the price back above the 50-day SMA today and the ETH/USDT pair could now reach the 20-day EMA where the bears may again pose a stiff challenge.

If the price turns down from the 20-day EMA, the bears will try to pull and sustain the pair below $3,956.44. That could clear the path for a possible decline to $3,371. Alternatively, a break and close above the 20-day EMA will signal that the corrective phase may be over. The pair could then retest the all-time high.

Binance Coin (BNB) plunged to the 50-day SMA ($517) on Nov. 18 but the strong rebound today indicates aggressive buying at lower levels. The bulls will now try to push the price above the 20-day EMA ($585).

If the BNB/USDT pair sustains above the 20-day EMA, it will indicate that the short-term correction may be over. The pair could then rise to the overhead resistance zone at $669.30 to $691.80 where the bears may pose a stiff challenge.

The break and close above the overhead resistance could signal the resumption of the uptrend. On the contrary, if the price turns down from the 20-day EMA, the likelihood of a break below the 50-day SMA increases. The pair could then drop to the 78.60% Fibonacci retracement level at $485.40.

Aggressive buying at lower levels has resulted in a sharp rebound today, indicating that bulls are defending the 50-day SMA support.

Contrary to this assumption, if the price turns down from the 20-day EMA, the bears will make one more attempt to pull the pair below the 50-day SMA and the trendline. If they manage to do that, the selling could intensify and the pair may drop to $140.

The long tail on the Nov. 16 and 17 candlestick shows that bulls attempted to defend the strong support at $1.87. However, the failure to sustain Cardano (ADA) above $1.87 may have prompted aggressive selling from traders on Nov. 18.

The bulls are currently trying to push the price back above $1.87. If they manage to sustain the price above this level, it could trap the aggressive bears. That could start a strong recovery which may reach the downtrend line.

Contrary to this assumption, if the price turns down from the current level or the 20-day EMA ($1.99), it will suggest that sentiment remains negative and traders are selling on rallies. The bears will then try to pull the pair below $1.70, extending the decline to $1.50.

The bulls pushed XRP above the moving averages on Nov. 18 but the long wick on the candlestick shows aggressive selling at higher levels. The price dropped to the psychological support at $1 where the bulls are mounting a strong defense.

A rebound off the current level could again face strong selling near the moving averages. If the price turns down from the 20-day EMA ($1.13), the bears will attempt to sink the XRP/USDT pair below $1.

If they can pull it off, the pair could extend its slide to the next support at $0.85. The selling may accelerate below this support.

On the contrary, if bulls drive and sustain the price above the moving averages, the pair could rise to the overhead resistance at $1.24.

Polkadot (DOT) broke below the horizontal support at $38.70 on Nov. 18 but bulls stepped in and arrested the decline at the uptrend line. The sharp rebound shows strong demand at lower levels.

However, the downsloping 20-day EMA ($45) and the RSI in the negative zone indicate that bears are in command. The bounce is likely to face stiff resistance in the zone between $43.27 and the 20-day EMA.

If the price turns down from the overhead zone, the bears will attempt to pull the DOT/USDT pair below $37.53. A close below this level will complete a bearish head and shoulders pattern, indicating the start of a deeper correction. Conversely, if bulls push the price above the 20-day EMA, the pair could rally to $47.83.

Dogecoin (DOGE) dropped to the strong support at $0.21 on Nov. 18. This level has acted as a support during the two previous declines and the bounce today shows that bulls are trying to start a relief rally.

The recovery is likely to face a stiff resistance at the downtrend line. The downsloping 20-day EMA ($0.25) and the RSI in the negative territory indicate that bears have the upper hand.

If the price turns down from the downtrend line, the bears will again try to sink the DOGE/USDT pair below $0.21. If that happens, the pair could slide to the critical support at $0.19.

This negative view will invalidate if the bulls push and sustain the price above the downtrend line. The pair will then attempt a rally to $0.30.

SHIBA INU (SHIB) dropped below the critical support at $0.000043 on Nov. 18 but the bears could not sink the price below the 50-day SMA ($0.000041). This indicates that bulls purchased aggressively at lower levels.

The relief rally is likely to face stiff resistance at the 20-day EMA ($0.000051). If the price turns down from this resistance, it will suggest that sentiment has turned negative and traders are selling on rallies.

The bears will then make one more attempt to pull the price below the 50-day SMA. Such a move could accelerate selling and the SHIB/USDT pair may complete a 100% retracement and drop to $0.000027.

Avalanche (AVAX) turned down from $110.41 on Nov. 18 but the long tail on the candlestick shows that bulls continue to buy at lower levels.

The rising 20-day EMA ($88) and the RSI near the overbought zone indicate that bulls are in control. The buyers are attempting to resume the uptrend by pushing the price above the all-time high.

Alternatively, if the bulls fail to sustain the price above $110.41, the pair could witness profit-booking and drop to the 20-day EMA. A break and close below this support could signal that the uptrend may be losing steam. The pair could then drop to $81.