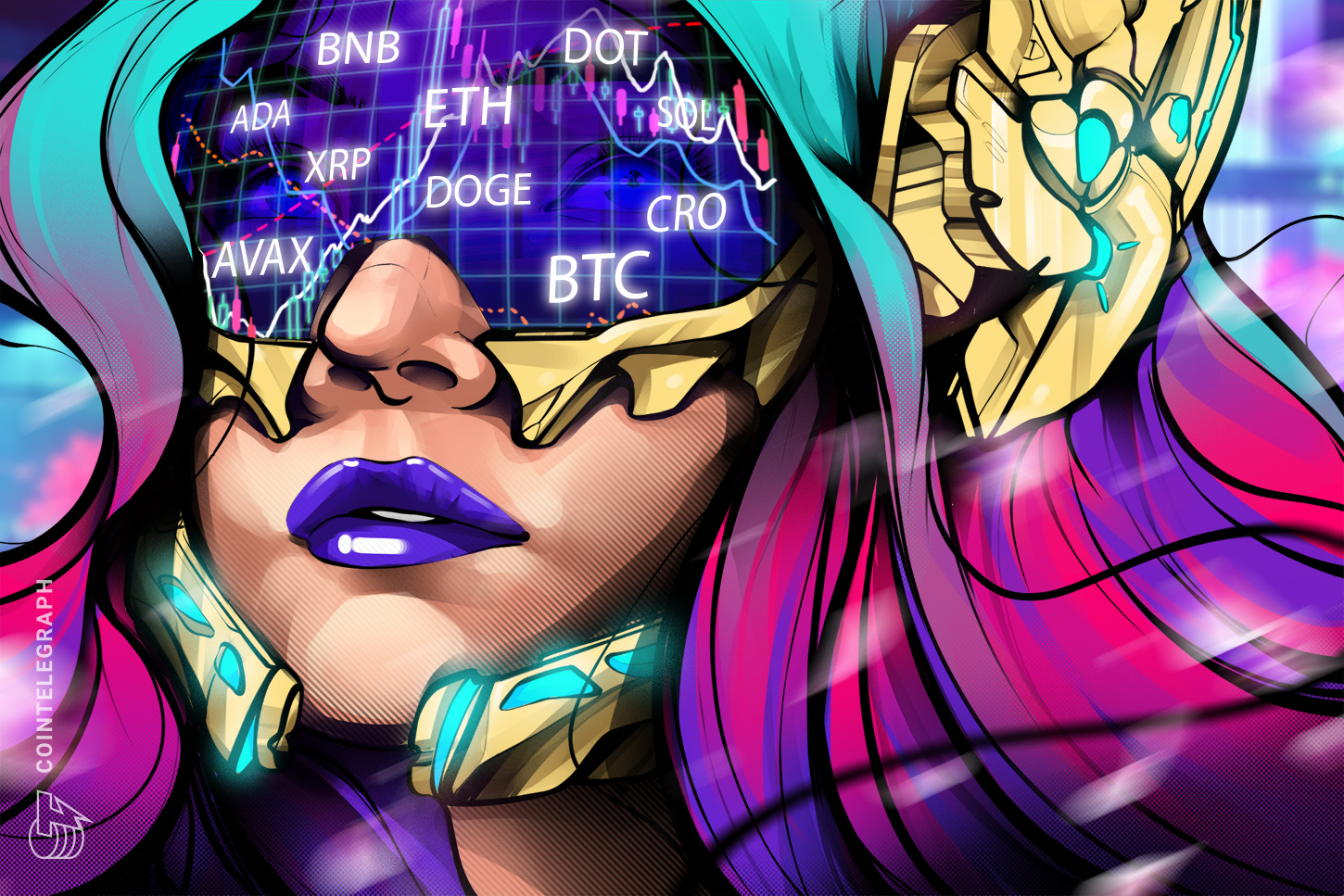 Bitcoin and most major altcoins are struggling to find bullish momentum, a possible signal that prices could continue to erode.

Bitcoin (BTC) and most major altcoins continue to be pinned below their respective overhead resistances, indicating that bears are selling on rallies.

According to Ki Young Ju, CEO of on-chain analytics firm CryptoQuant, “whales are depositing Bitcoin to exchanges.” Curiously, the outflows from the exchanges have also continued and due to this, the reserves are still hovering close to their lowest levels since mid-2018.

In a somewhat contradictory report, Glassnode said that long-term holders may be “reducing their spending, and thus are more likely to be adding to positions, not exiting them.”

While Bitcoin has been in a corrective phase in dollar terms, it has proven to be a savior of purchasing power for Turkish investors. While the lira continues to lose value in 2021, Bitcoin in lira terms has regularly been hitting new all-time highs and it crossed 700,000 lira on Nov. 23.

Let’s study the charts of the top-10 cryptocurrencies to find out whether it is time for a rebound or could the correction deepen further?

The moving averages have completed a bearish crossover and the relative strength index (RSI) continues to languish in the negative territory, signaling that bears have the upper hand.

If the price slips below $55,317, the selling may intensify and the BTC/USDT pair could drop to the $52,500 to $50,000 support zone. The bulls are likely to defend this zone aggressively but the subsequent rebound may face selling at the 20-day exponential moving average ($60,084).

This negative view will invalidate if the price turns up from the current level and breaks above the downtrend line. The pair could then attempt to resume the uptrend.

Ether (ETH) rebounded from close to the neckline of the developing head and shoulders (H&S) pattern on Nov. 22. The rebound off the neckline reached the 20-day EMA ($4,337) on Nov. 23, which is acting as a strong resistance.

If the price turns down from the current level and breaks below the 50-day simple moving average ($4,169), the bears will again attempt to pull the ETH/USDT pair below the neckline. If they succeed, it will complete the bearish pattern, which has a target objective at $3,047.

Conversely, if bulls push the price above the 20-day EMA and the resistance at $4,451, it will suggest that the selling pressure may be reducing. The pair will then attempt to rally to the overhead resistance zone at $4,772.01 to $4,868. A break and close above this zone will signal the resumption of the uptrend.

This indicates that bulls are accumulating at lower levels. The buyers tried to clear the overhead hurdle on Nov. 23 but the bears again defended this level aggressively. The price is currently hovering near the 20-day EMA.

If the price turns up from the current level and breaks above $605.20, the BNB/USDT pair could attempt to challenge the resistance at $669.20. If this level is crossed, the pair could retest the all-time high at $691.80.

On the contrary, if the price sustains below the 20-day EMA, the bears will again try to pull the pair to the 50-day SMA. A break and close below this support could signal the start of a deeper correction.

Solana (SOL) broke below the 20-day EMA ($219) on Nov. 22. The bulls pushed the price back above this level on Nov. 23 but could not sustain the higher levels. This indicates that bears are defending the 20-day EMA.

The bears will now try to pull the price to the support line of the symmetrical triangle. This is an important level for the bulls to defend because a break below it could tilt the advantage in favor of the bears. The SOL/USDT pair could then start its downward move to $153 and later to $140.

Alternatively, if the price turns up and breaks above the resistance line, it will signal that bulls have the upper hand. The pair could then rally to the all-time high at $259.90 where the bears are expected to mount a stiff resistance.

The downsloping moving averages and the RSI near the oversold zone indicate that bears are in control. The ADA/USDT pair could now drop to the strong support at $1.50 where the buyers are expected to step in.

On the upside, the bulls will have to push and sustain the price above the 20-day EMA to indicate that the selling pressure may be reducing. The trend may turn in favor of the bulls on a break and close above the downtrend line.

XRP rebounded off the psychological support at $1 on Nov. 23 but the bulls have not been able to push the price to the 20-day EMA ($1.10). The shallow bounce indicates that bears continue to sell on every minor relief rally.

The bears will once again try to sink and sustain the price below the strong support at $1. If they manage to do that, the selling could accelerate and the XRP/USDT pair could drop to the critical support at $0.85.

The downsloping 20-day EMA and the RSI in the negative zone suggest that the path of least resistance is to the downside. This negative view will invalidate if the price rises and breaks above the 50-day SMA ($1.12). That could open the doors for a possible rally to $1.24.

Polkadot (DOT) rebounded off the uptrend line on Nov. 23 but the bulls could not sustain the higher levels. The price has again turned down and dropped to the uptrend line.

The frequent retest of a support level tends to weaken it. The moving averages have completed a bearish crossover and the RSI is below 40, indicating that bears are in command.

If the price breaks and closes below $37.53, the DOT/USDT pair will complete a bearish H&S pattern. The pair could then start a deeper correction toward $26.

Conversely, if the price rebounds off the current level, the bulls will make one more attempt to overcome the barrier at $43.56. If they can pull it off, it will signal that the sellers may be losing their grip.

Dogecoin (DOGE) bounced off the critical support at $0.21 on Nov. 23 but the long wick on the day’s candlestick suggests that bears continue to sell near the downtrend line.

The DOGE/USDT pair broke below the $0.21 support today and the bears will now attempt to pull the price to the critical support at $0.19. This is an important support for the bulls to defend because if it cracks, the pair could plummet to $0.15.

The downsloping 20-day EMA ($0.24) and the RSI below 37 indicate that bears have the upper hand. The first sign of strength will be a break and close above the downtrend line. That will indicate a possible comeback by the bulls.

The bulls failed to push Avalanche (AVAX) above the all-time high at $147 on Nov. 22, indicating that bears are aggressively defending the overhead resistance. This may have prompted profit-booking from the short-term traders.

The AVAX/USDT pair has started a correction that could find strong support in the zone between the 38.2% Fibonacci retracement level at $112.63 and the 20-day EMA ($103).

If the price rebounds off this zone, it will suggest that sentiment remains positive and traders are buying on dips. The bulls will then make one more attempt to push the pair above the all-time high and resume the uptrend.

Alternatively, a break and close below the 20-day EMA will signal that supply exceeds demand. The pair could then drop to the 61.8% Fibonacci retracement level at $91.39.

Crypto.com Coin (CRO) has been in a strong uptrend for the past few days. The vertical rally has pushed the RSI close to 90, indicating that the rally is overheated in the short term. This could result in a minor correction or consolidation for a few days.

The up-move may witness profit-booking near the psychologically important barrier at $1. If that happens, the CRO/USDT pair could start a correction. The first major support on the downside is the 38.2% Fibonacci retracement level at $0.73.

Generally, vertical rallies are followed by sharp declines. If the price breaks below $0.73, the correction may extend to the 61.8% retracement level at $0.59. Conversely, if the price bounces off $0.73, the bulls will make one more attempt to resume the uptrend.