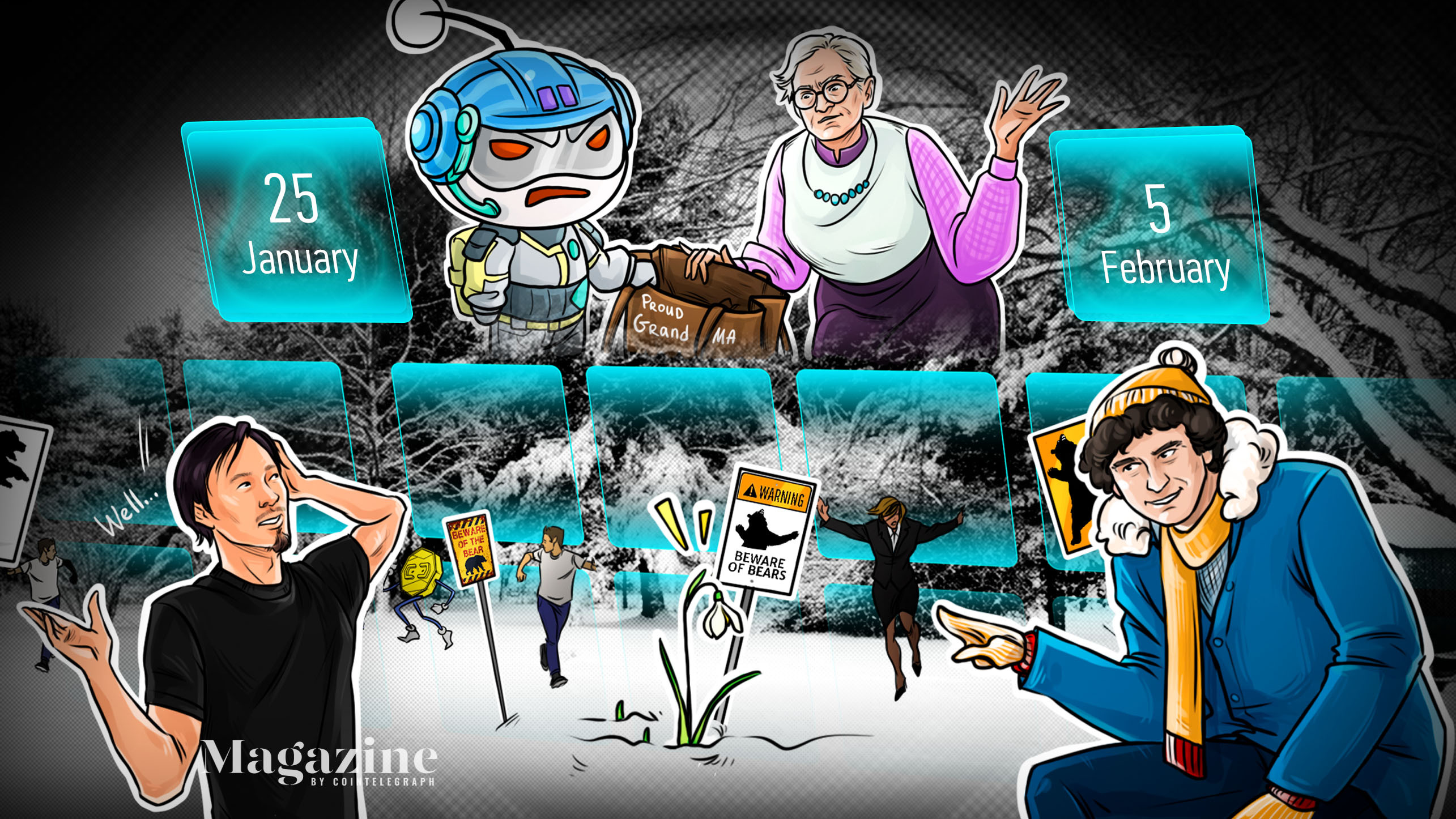 According to a report from security researcher 3xp0rt, a powerful new malware variant known as the Mars Stealer, an upgrade of the information-stealing Oski trojan of 2019, can target more than 40 browser-based crypto wallets, including MetaMask and Coinbase Wallet, along with popular two-factor authentication (2FA) extensions.

The nefarious software utilizes a grabber function that steals private keys after it has been downloaded, unbeknownst to the user who may have visited or utilized various channels, such as file-hosting websites, torrent clients and any other shady downloaders.

Notably, the malware checks the set language of the device, and if it matches the language ID of locations such as Kazakhstan, Uzbekistan and Russia, the software leaves the system without any malicious activity.

However, for any device with a language outside of those categories, the malware targets files holding sensitive information, such as crypto wallets address info and private keys. Then, it leaves without a trace.

Jack Dorsey: Diem was a waste of time, Meta shouldve focused on BTC

Twitter founder and former CEO Jack Dorsey has unsurprisingly slammed the move of a competitor, with Meta (formerly Facebook) taking the hit for its wasted effort and time not working on Bitcoin.

Dorsey is an avid Bitcoin supporter who has made the asset a focus of his newer, shinier company, Block. During an interview with BTC bull Michael Saylor on Tuesday, Dorsey commented on the recent shutdown of Metas stablecoin project, Diem, which has been plagued with regulatory pushback since it began.

Those two or three years or however long its been couldve been spent making Bitcoin more accessible for more people around the world, the almighty Dorsey said from his throne.

Speaking of Meta, the firms share price took a nosedive of around 26% on Thursday following a lackluster quarterly earnings report that revealed an annual profit decrease and a decline in daily active users.

Meta reported $33.67 billion worth of total revenue for Q4 2021, compared to $28 billion the year prior. However, its net income fell to $10.28 billion from $11.2 billion one year earlier. A hefty $10 billion investment in its Reality Labs division also contributed to the disappointing quarterly results.

While the centralized metaverse-focused firm faced choppy waters, native tokens from decentralized counterparts in The Sandbox (SAND) and Decentraland (MANA) jumped 17.5% and 20%, respectively. Commenting on the news, Animoca Brands chairman and co-founder Yat Siu suggested that this was part of a broader trend in which the top talent and users from Web2 platforms are shifting to the open world of Web3.

Can blockchain solve its oracle problem?

A new intro to Bitcoin: The 9-minute read that could change your life

$2.5B in stolen BTC from Bitfinex hack awakens

According to blockchain analytics bot Whale Alert, a hefty $2.5 billion worth of BTC obtained via the 2016 Bitfinex exchange hack moved from the hackers wallet to an unknown address on Tuesday.

The funds have remained inactive since 2016 as the hackers are essentially unable to cash out the holdings. Many onlookers have pondered whether the hacker has started moving the funds around again to manipulate the market and scare investors into selling their BTC.

The largest transaction Whale Alert detected was around 10,000 BTC, or $383 million, while other transactions amounted to as little as 0.29 BTC. The wallet address that received the blacklisted BTC now holds a total of 94,643.29 BTC, which is around $3.6 billion.

A solo Bitcoin miner and Solo CKPool user with a whooping 1.14 petahashes per second (PH/s) of computing power was lucky enough to generate a $240,000 block reward on Tuesday. While the odds of it happening were estimated to be lower than 20%, it is apparently the fourth blockfind for the CKPool since mid-January.

The miner utilizes the Solo CKPool, a service that offers anonymous solo Bitcoin mining for a fee. While the miner is described as a whale in this instance due to their high computational power, in January a CKPool miner with a minuscule hash rate of just 126 terahashes per second (TH/s) was able to solve a valid block.

CKPools solo miners have solved 264 blocks over the entirety of the Bitcoin blockchains existence, representing a mere 0.037% of the total 721,240 blocks solved. 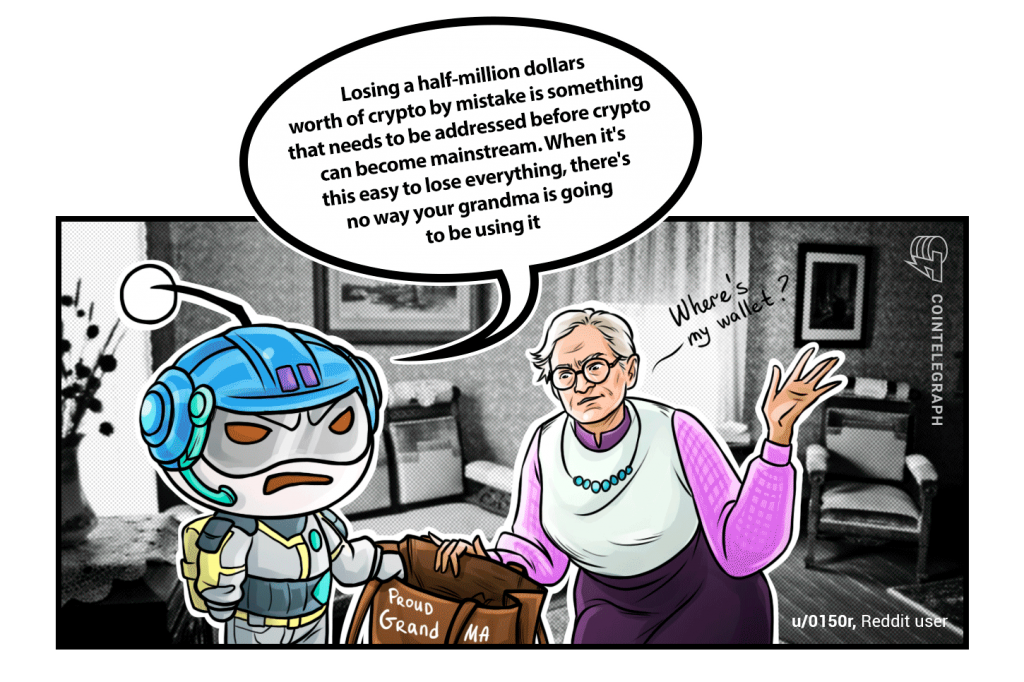 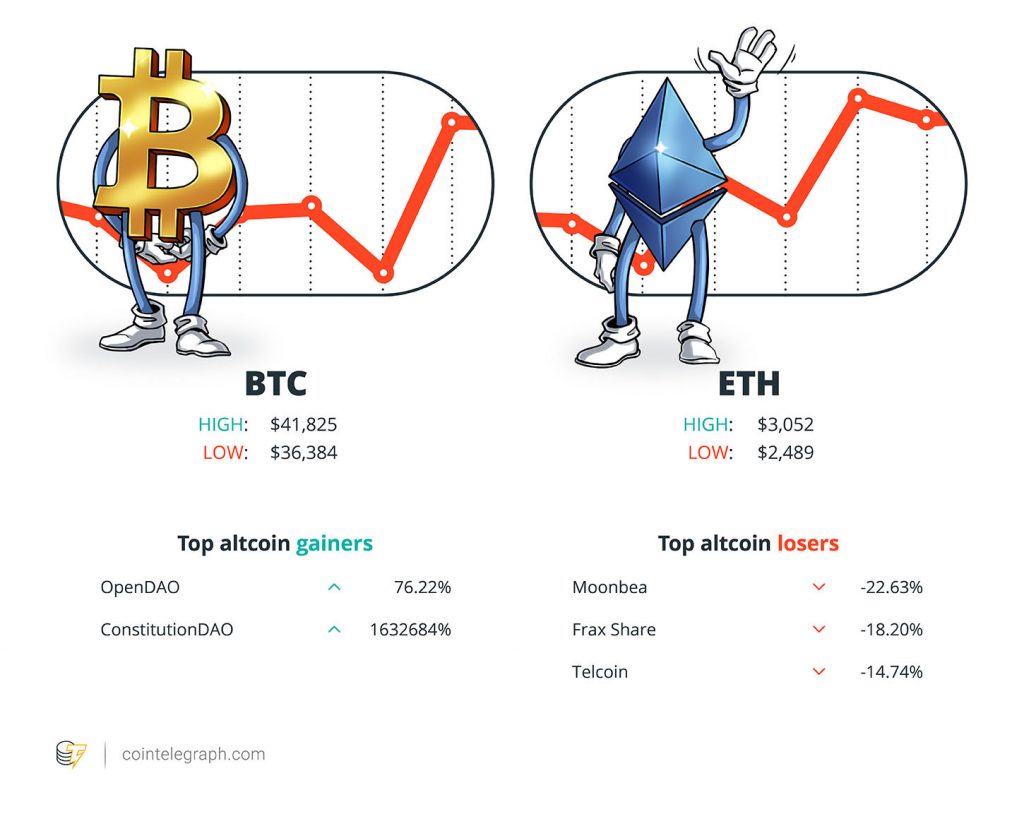 Can blockchain solve its oracle problem?

A new intro to Bitcoin: The 9-minute read that could change your life

Structurally, on-chain, its not a bear market setup. Even though I would say were at peak fear. No doubt about it, people are really scared, which is typically […] an opportunity to buy.

This whole thing with Libra and then Diem, I think theres a ton of lessons [there]. […] Hopefully, they learned a lot, but I think there’s a lot of wasted effort and time.

Do not ask me to do a fucking NFT.

“Losing a half-million dollars worth of crypto by mistake is something that needs to be addressed before crypto can become mainstream. When it’s this easy to lose everything, there’s no way your grandma is going to be using it.”

If you only focus on eliminating risks associated with a specific industry in regulatory efforts, you would also eliminate any potential benefits and opportunities that would otherwise be offered by the same industry.

I think were not entering a long-term crypto winter. […] There have been changes in expectations of interest rates, and thats been moving crypto markets. But its been moving markets more generally as well.

We can avoid making the same mistakes we did with Facebook, Instagram, Twitter, and social media generally if we can develop an intellectual framework for regulating the Metaverse now.

Its become clear to me that #Bitcoin will be the one asset and L1 still around in 20+ years with increased compounding relevance over time.

Can Ethereum price reach $4K after a triple-support bounce?

Pseudonymous chart analyst Wolf has read the tea leaves and forecasted that Ether will continue its recent rebound up to around the $4,000 region.

Central to Wolfs short-term prediction over the next couple months is whether Ethers so-called triple-support scenario could push the price past $3,330, which would establish an inverse-head-and-shoulders (IH&S) pattern that could launch the price toward late-2021 levels.

In a perfect scenario, a break above the IH&S neckline may push the Ether price to as high as the maximum distance between the neckline and the head, which would be around $4,000 in this case. 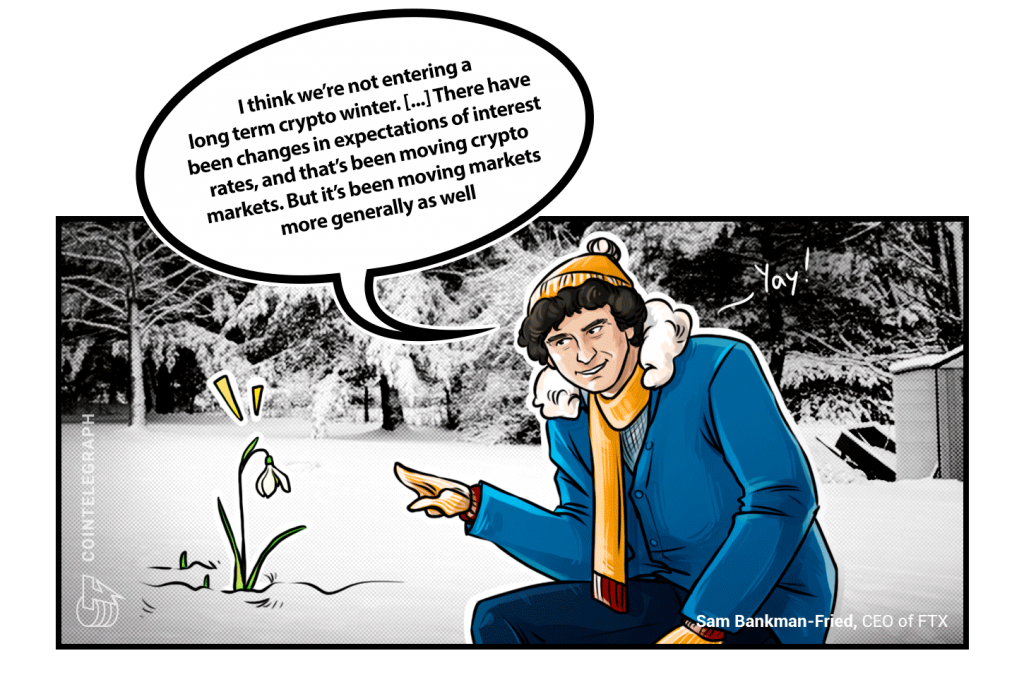 The Wormhole token bridge was the victim of a major breach this week, as attackers made off with a whopping 120,000 Wrapped Ether (wETH) worth roughly $321 million at the time.

The cross-chain bridge supports several blockchains, allowing the attacker to target the Solana side of the bridge by minting 120,000 wETH. They then redeemed 93,750 wETH for ETH, worth roughly $254 million, on the Ethereum network.

The Wormhole team stated shortly after the incident that it was working to replenish enough ETH to ensure wETH is backed 1:1, with reports surfacing the following day that venture capital fund Jump Crypto had dipped into its own pocket to do so. The hacker has also been offered a bounty of $10 million by the Wormhole team to return the funds.

Disgraced content creator and influencer Paul Ice Poseidon Denino found himself in hot water this week after YouTuber and internet detective Coffeezilla published a not-so-flattering series of videos about him.

Coffeezilla initially posted a video interview between the two in which Ice Poseidon allegedly confirmed that he rug-pulled around $750,000 worth of investors money from a crypto project he launched called CxCoin.

The CxCoin project was pitched to his investors as a long-term investment. However, within a few weeks of launch, the influencer said he stopped working on the project and decided to pull out around $300,000 from the liquidity pool. He cited the crashing crypto market as the reason for this move, and then said he wouldnt return the funds. He also allegedly bought a brand new Tesla only a few days after the funds went missing.

Kanye West says no to NFTs

Hip hop legend Ye, more commonly known as his birth name Kanye West, shut down any notion of jumping into NFTs on Monday after he made a strongly worded Instagram post to his 10.7 million followers stating, Do not ask me to do a fucking NFT, and that he only wants to work on building real products in the real world.

STOP ASKING ME TO DO NFTs IM NOT FINNA CO-SIGN FOR NOW IM NOT ON THAT WAVE I MAKE MUSIC AND PRODUCTS IN THE REAL WORLD, he stated in a follow-up comment on his Instagram post.

While some might call it FUD that a major celebrity and cultural icon like Kanye West is not hopping aboard the NFT gravy train, it is kind of refreshing to see a popular figure not mindlessly shill something they do not fully comprehend. 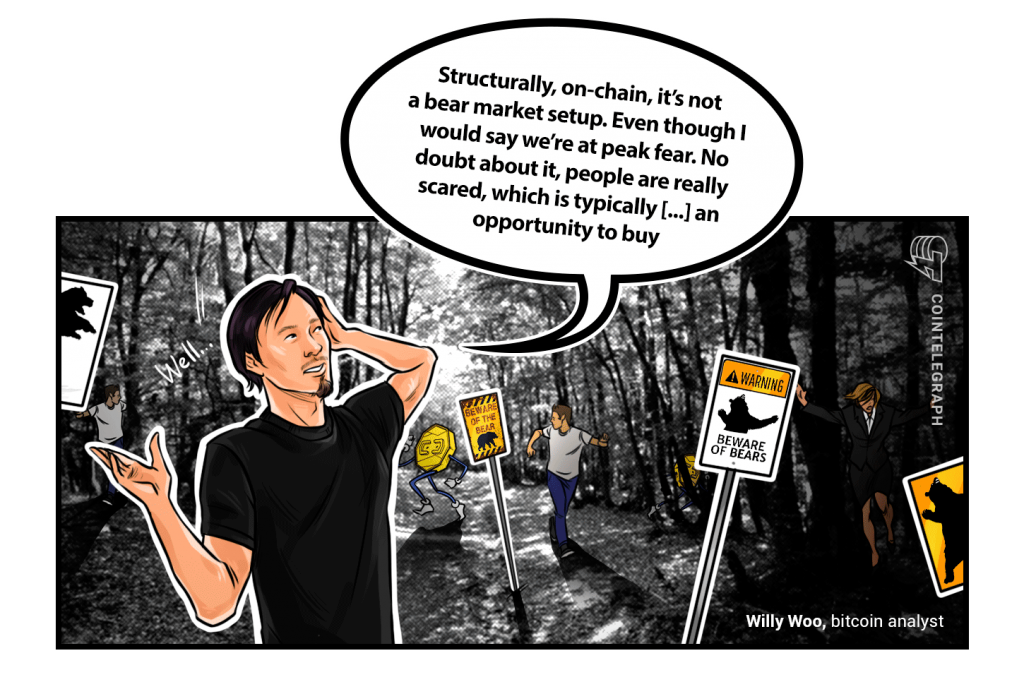 What the hell is Web3 anyway?

Web3 or Web 3.0 as crypto boomers like to call it is a topical buzzword with only a very vague definition. Everyone agrees it has something to do with a blockchain-based evolution of the internet but, beyond that, what is it, really?

Web3 developer growth hit an all-time high in 2021, yet challenges lie ahead for new developers flooding the space.

Organizations and artists are using NFTs to give back to children in need, demonstrating new potential for nonfungible tokens.