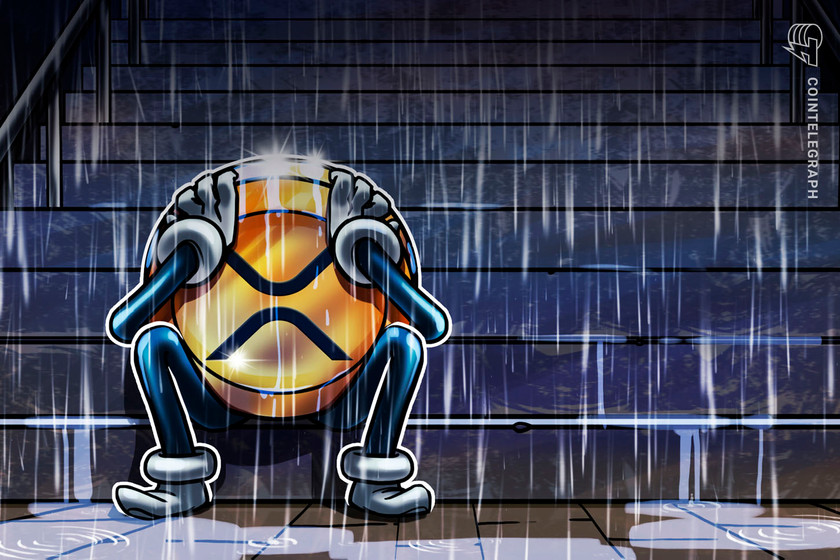 A combination of technical, fundamental, and social sentiment indicators spell downside risks for XRP after its price rises over 8% week-to-date.

XRP price risks dropping by more than 25% in the coming weeks due to a multi-month bearish setup and fears surrounding excessive XRP supply.

XRP has been consolidating inside a descending triangle pattern since topping out at its second-highest level to date — near $1.98 — in April 2021.

In doing so, the XRP/USD pair has left behind a sequence of lower highs on its upper trendline while finding a solid support level around $0.55, as shown in the chart below.

In the week ending March 13, XRP's price again tested the triangle's upper trendline as resistance, raising alarms that the coin could undergo another pullback move to the pattern's support trendline near $0.55, amounting to a drop between 25% and 30%.

The downside outlook also takes cues from other bearish catalysts that has emerged around the triangle resistance.

For instance, XRP formed a bearish hammer on March 12, a single candlestick pattern with a small body and a long upside wick, suggesting lower buying pressure near the coin's week-to-date top of around $0.85.

Additionally, the price turned lower after testing a confluence of resistances defined by its 20-week exponential moving average (20-week EMA; the green wave) and its 50-week EMA (the red wave), as shown in the attached image below.

More downside cues for XRP come after Ripple Labs locked 800 million XRP in escrow as a part of its programmed schedule for withdrawals.

The blockchain payment company moved around 100 million XRP worth nearly $40 million to exchange wallets on March 3. Meanwhile, it kept the other 700 million XRP (worth around $550 million) in an escrow account, raising anticipations that at least 200 million XRP would be flooded into the market to generate funds for Ripple's operational expenses, as well as to distribute XRP among Ripple's global clientele.

Meanwhile, it kept the other 700 million XRP (worth around $550 million) in an escrow account, raising anticipations that at least 200 million XRP would enter the market to generate funds for Ripple's operational expenses, as well as to distribute XRP among Ripple's global clientele.

I understood there are some 800 million $XRP that are locked up and ready to be sold...someone should check the increase in circulating supply to verify this

The selloff fears originated from the XRP price's earlier response to unexpected supply hikes. For instance, XRP/USD fell by more than 50% to near $0.60 four months after its net supply in circulation increased from 40.46 billion to over 47 billion in just two days.

Nonetheless, Ripple's withdrawal of 800 million XRP has not yet been reflected in its net circulating supply.

Another catalyst that hints XRP's price could fall 25-30% to reach its descending triangle target is a Santiment indicator that tracks social media trends and their impact on market trends.

XRP's price rose by over 15% week-to-date on March 12, notes Santiment, alongside a large spike in social media searches for the hashtag #XRPNetwork, suggesting that it could follow up with a potential selloff ahead. Excerpts:

"Historically, our social trends indicate that profit-taking is justified whenever the crowd makes the #XRPNetwork a top topic."