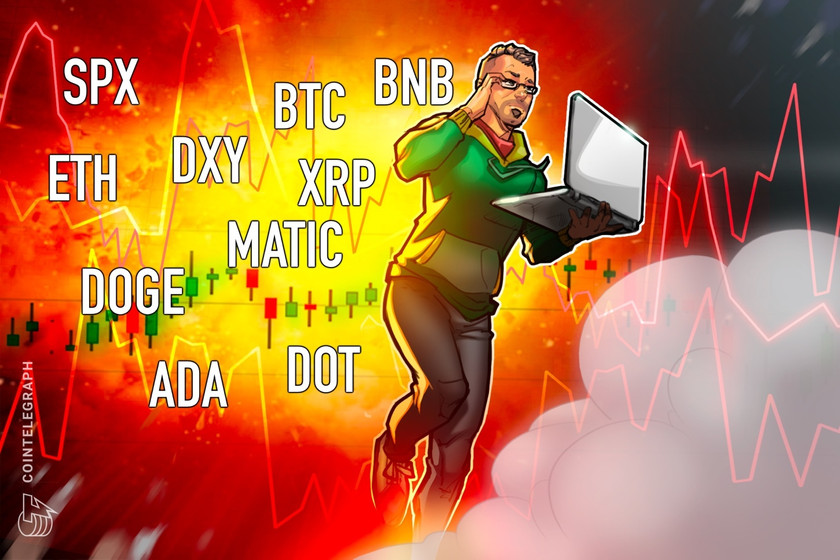 Cryptocurrency and stock markets could see a sharp spike in volatility due to this week’s CPI print, interest rate hike and a conference from Federal Reserve chair Jerome Powell.

The consumer price index (CPI) data on Dec. 13 and the outcome of the Federal Reserve meeting on Dec. 14 could influence the United States stock markets and the cryptocurrency markets in the near term.

Traders are likely to play it safe and not take large directional bets until the CPI print because any nasty surprise could produce a sharp knee-jerk reaction.

Some analysts believe that Bitcoin (BTC) could fall further before it hits a bottom, but Arthur Hayes, the former CEO of crypto derivatives platform BitMEX, thinks that Bitcoin may have passed its worst phase for this cycle.

While speaking with podcaster and independent market analyst Scott Melker, Hayes said that he believesthe “largest most irresponsible entities” have largely dumped their Bitcoin and “pretty much everyone who could go bankrupt has gone bankrupt.” Hayes expects Bitcoin to recover sometime in 2023.

Could risky assets witness a Santa rally and end the year on a strong footing? Let’s study the charts to find out.

The failure of the bulls to push the S&P 500 index (SPX) above the downtrend line may have tempted short-term traders to book profits. The price turned down on Dec. 1 and broke below the 20-day exponential moving average (3,958) on Dec. 6.

The bears are trying to flip the 20-day EMA into resistance. If they succeed, the index could witness further selling and break below the immediate support at 3,918. That could pull the price down to the 50-day simple moving average (3,847).

The U.S. dollar index (DXY) has been oscillating near the critical support of 105 for the past few days. The bears pulled the price below this level on Dec. 1 but the bulls purchased the dip near 104 and started a recovery on Dec. 5.

However, the up-move could not even reach the 20-day EMA (106) which suggests that the bears are aggressively selling on every minor rally. The bears will try to resume the downtrend by pulling the price below 104. If this level cracks, the next stop could be 102 and then the psychological level of 100.

If bulls want to avert this decline, they will have to quickly push the price back above the 20-day EMA. The index could then rise to the overhead resistance of 108.

Bitcoin has been stuck between $16,678 and $17,424 for the past few days. This indicates that the bears are protecting the overhead resistance at $17,622 and the bulls are buying the minor dips.

Usually, tight ranges are followed by an increase in volatility but it is difficult to predict the direction of the breakout. Therefore, it is better to wait for the price to break above the resistance or below the support before taking directional bets.

The advantage could shift in favor of the buyers if the price breaks and closes above the 50-day SMA ($17,911). That could clear the path for a possible rally to the downtrend line.

On the contrary, if the price turns down and plunges below $16,678, several buyers may be forced to close their positions. That could pull the BTC/USDT pair to $15,476.

Ether (ETH) has been oscillating near the 20-day EMA ($1,255) for the past few days. This indicates indecision between the bulls and the bears.

The flattish moving averages and the relative strength index (RSI) near the midpoint do not give a clear advantage either to the bulls or the bears. The ETH/USDT pair may trade between $1,218 and $1,309 for some more time.

The first sign of strength will be a break and close above the 50-day SMA ($1,326). That could open the doors for a possible rally to the resistance line of the descending channel.

The bulls repeatedly failed to push and sustain BNB’s (BNB) price above the 20-day EMA ($288) in the past few days. The bears latched on to this opportunity and are trying to pull the price lower.

The 20-day EMA has started to turn down and the RSI has dipped below 42, indicating that bears are in command.

There is a minor support at $275 but if that level gives way, the BNB/USDT pair could slump to the vital support at $250. Buyers are expected to defend this level and keep the pair range-bound between $250 and $300 for some more time.

The bulls will have to push and sustain the price above $300 to gain the upper hand. The pair could then attempt a rally to $338.

The 20-day EMA has started to turn down gradually and the RSI has slipped near 42, suggesting that bears have the edge. If the $0.37 support gives way, the selling could intensify and the XRP/USDT pair could drop to $0.33.

Dogecoin (DOGE) turned down and broke below the 50-day SMA ($0.09) on Dec. 11, which suggests that the bulls may be losing their grip.

The DOGE/USDT pair could drop to $0.08 which could act as a minor support. If the price bounces off this level but fails to break above the 20-day EMA, it will enhance the prospects of a drop to the crucial support at $0.07.

On the upside, buyers will have to kick the price above the psychological level of $0.10 to gain the upper hand. The pair could then rise to $0.11. If buyers clear this hurdle, the pair could pick up momentum and rally to the 61.8% Fibonacci retracement level of $0.13.

Related: What is a Doji candle pattern and how to trade with it?

Cardano (ADA) has continued its downward move and is near the vital support at $0.29. Though the RSI is showing a positive divergence, the bulls have failed to drive the price above the 20-day EMA ($0.31). This suggests that the sentiment remains negative and the bears are not willing to let go of their advantage.

If the price breaks below the $0.29 support, the ADA/USDT pair could start the next leg of the downtrend. The pair could then decline to the support line, which is likely to attract buyers as the price rebounded off this level on two previous occasions.

Contrary to this assumption, if the price rebounds off $0.29, the bulls will try to thrust the pair above the 20-day EMA and the overhead resistance at $0.33. If they can pull it off, the pair could rise to the downtrend line.

Polygon (MATIC) slid below the 20-day EMA ($0.90) on Dec. 11 and reached the uptrend line on Dec. 12. Buyers will try to stall the pullback at this level and start a relief rally.

If the price rebounds off the current level, the bulls will again try to catapult the MATIC/USDT pair above the overhead resistance at $0.97. If they can accomplish that, the pair could rally to $1.05 where the bears may mount a strong defense.

Conversely, if the price breaks below the uptrend line, the pair could drop to $0.80 and later to $0.76. That could keep the pair sandwiched between the important levels of $0.69 and $1.05 for a while longer.

Polkadot (DOT) rebounded off the uptrend line on Dec. 7 but the bulls could not propel the price above the 20-day EMA ($5.40). This indicates that the sentiment remains negative and traders are selling on rallies.

The price turned down and broke below the uptrend line on Dec. 11. The bears tried to sink the DOT/USDT pair below the critical support at $5 on Dec. 12 but the long tail on the candlestick shows that bulls are trying to defend the level.