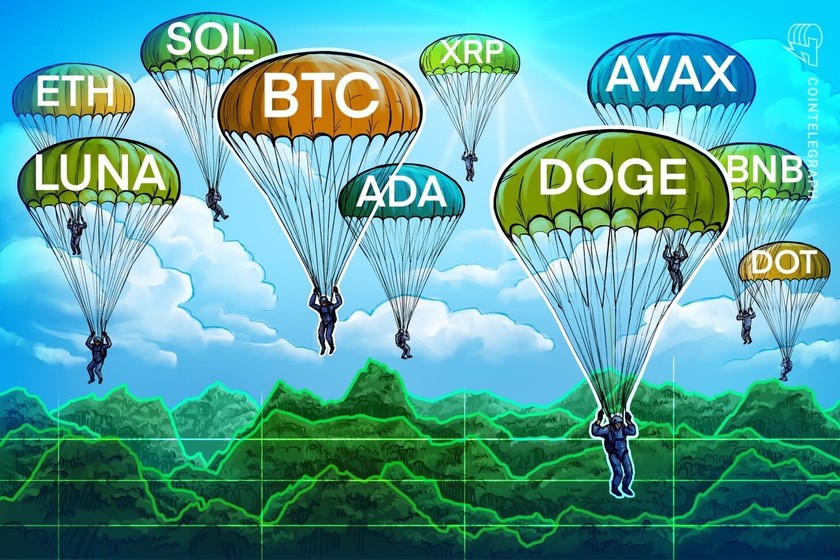 Bitcoin and several altcoins are showing early signs that the bear trend could be ending, but overcoming higher levels may prove to be a challenge.

For the past few days, investors seem to have been accumulating cryptocurrencies at lower levels. CoinShares data for the week ending March 6 shows that cumulative inflows of $127 million into digital asset investment products were the highest since Dec. 12, 2021, and Bitcoin products saw an increase for the seventh consecutive week.

However, Bloomberg Intelligence senior commodity strategist Mike McGlone sounded cautious when he warned that the current geopolitical situation and surging crude oil prices caused a global recession, Bitcoin and Ether could face selling pressure initially. McGlone cautioned that if the U.S. equity markets plunge, Ether could drop to $1,700 because it is closely correlated to Nasdaq 100.

Could Bitcoin and altcoins sustain the higher levels? Let’s analyze the charts of the top-10 cryptocurrencies to find out.

The failure of the bears to pull the price below the immediate support at $37,000 may have attracted strong buying by the bulls. Bitcoin has soared above the moving averages on March 9.

The relative strength index (RSI) has jumped into the positive territory, indicating that the momentum may be turning bullish. If buyers sustain the price above the moving averages, the BTC/USDT pair could rise to the overhead zone between $45,000 and the resistance line of the ascending channel. The bears are expected to defend this zone with vigor.

If the price turns down from the overhead zone, the pair could extend its stay inside the channel for a few more days. The bears will have to pull and sustain the price below the support line of the channel to gain control.

The bears could not capitalize on the breakdown below the symmetrical triangle. Strong buying by the bulls near $2,400 started a recovery and Ether (ETH) has re-entered the triangle. This suggests that the recent breakdown may have been a bear trap.

The bulls are attempting to push and sustain the price above the moving averages. If they do that, the ETH/USDT pair could rally to the resistance line of the triangle. If bulls clear this barrier, it will suggest the possible start of a new uptrend. The pair could first rally toward the psychological level at $4,000 and then make a dash toward the pattern target at $4,311.

This positive view will invalidate if the price turns down from the current level or the resistance line. That could keep the pair inside the triangle for a few more days. The bears will have to pull the pair below $2,400 to gain the upper hand.

Binance Coin (BNB) has broken above the 50-day simple moving average (SMA) ($392) and if bulls sustain the higher levels, the up-move could reach the overhead resistance at $445.

The bears are likely to mount a strong defense at $445. If the price turns down from this level, the BNB/USDT pair could drop to the moving averages. The flat 20-day exponential moving average (EMA) ($387) and the RSI near the midpoint indicate a balance between supply and demand.

If bulls fail to sustain the price above the 50-day SMA, the bears will fancy their chances and try to pull the pair toward the support at $350. The price action inside the range between $445 and $350 is likely to remain volatile.

The bulls continue to defend the 50-day SMA ($0.72), indicating strong demand at lower levels. The buyers will now try to push and sustain Ripple (XRP) above the downtrend line.

If they succeed, the buying could accelerate and the XRP/USDT pair may rally to the overhead zone between $0.85 and $0.91. This zone may offer strong resistance by the bears but if the bulls bulldoze their way through, the pair could rally to the psychological level at $1.

On the downside, the bears will have to pull and sustain the price below $0.68 to turn the tables in their favor. The pair could then drop to the Feb. 24 intraday low at $0.62.

Terra’s LUNA token bounced off the 20-day EMA ($77) on March 8, indicating that the sentiment remains positive and traders are buying on dips.

The bulls have pushed the price above the overhead resistance at $94 and the LUNA/USDT pair is now close to the all-time high at $103. This level is likely to act as a stiff resistance but if bulls overcome this barrier, it will suggest the start of a new uptrend. The pair could then rally toward $125.

Alternatively, if the rally stalls at $103, the bears will attempt to pull the price back below $94. If that happens, the bullish momentum could weaken in the short term. The positive momentum could remain intact as long as the price sustains above $94.

Solana (SOL) has bounced off the critical support at $81, indicating strong demand at this level. The RSI has formed a positive divergence, suggesting that the selling pressure could be reducing.

The bulls will now try to push the price above the downtrend line. If they manage to do that, it will invalidate the developing descending triangle pattern. Such a move may result in short-covering by the aggressive bulls, propelling the price toward the overhead resistance at $122. If bulls clear this hurdle, it could signal the start of a new uptrend.

This bullish assumption will invalidate if the price turns down and breaks below the strong support at $81. That will complete the descending triangle pattern and open the doors for a possible drop to $66.

Cardano (ADA) bounced off the $0.74 support, indicating that bulls are buying on dips. The bulls will now attempt to push the price above the 20-day EMA ($0.90) and challenge the psychological level at $1.

If the price turns down from $1, it will suggest that bears continue to sell at higher levels. The ADA/USDT pair could then spend some time inside the $0.74 to $1 range.

If bears sink the price below $0.74, the downtrend could resume. The pair could then drop to the next support at $0.68.

On the other hand, if bulls push and sustain the price above $1, it will signal a possible change in the short-term trend. The pair could then rise to $1.26 where the bears may mount a strong resistance.

Avalanche (AVAX) bounced off the uptrend line, indicating that bulls continue to buy on dips to this level. The buyers will now attempt to push the price to the downtrend line of the descending channel.

A break and close above the channel will signal a potential change in trend. The AVAX/USDT pair could then rally to the psychological level at $100.

The bulls held on to the support at $16 on March 7, which is a positive sign. Polkadot (DOT) will now attempt to break above the 50-day SMA ($18), which is an important level to keep an eye on.

If the price sustains above the 50-day SMA, it will indicate a possible change in the short-term trend. The DOT/USDT pair could then rally to the overhead resistance at $23. A break and close above this level could signal the start of a new uptrend with the first target objective at $30 and then $32.

Contrary to this assumption, if the price turns down from the 50-day SMA, it will suggest that bears are not willing to relent and are selling on rallies. That will increase the possibility of a break below $16.

Dogecoin (DOGE) broke and closed below $0.12 on March 7 but the bears could not take advantage of this breakdown. This indicates that bulls are defending the zone between $0.12 and $0.10 aggressively.

The bulls have pushed the price back above the breakdown level at $0.12. If the DOGE/USDT pair sustains above this level, the bulls will attempt to drive the price above the moving averages. If they succeed, it will suggest that bears may be losing their grip. The pair could then rally to the overhead resistance at $0.17.

Contrary to this assumption, if the price turns down from the moving averages, it will indicate that bears have not yet given up and are selling on rallies. The sellers will then again try to sink the pair below the support zone.