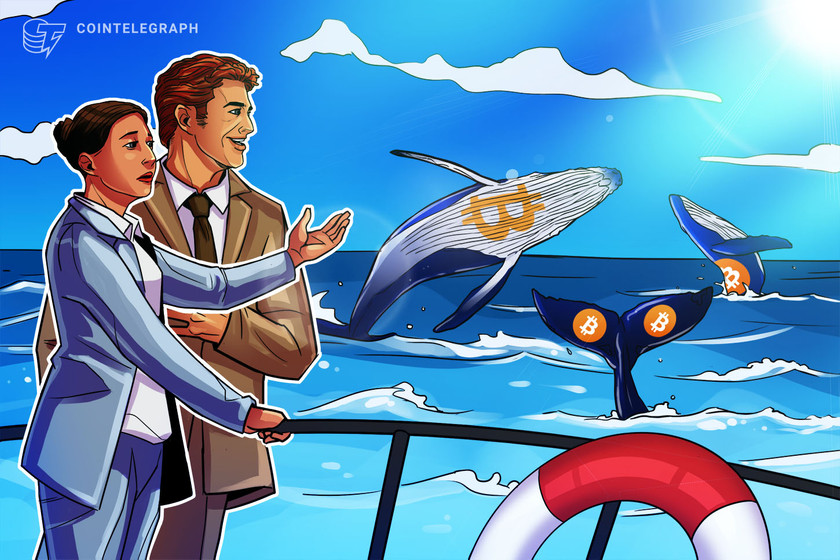 Bitcoin in, and Bitcoin out: major players are deploying different strategies as BTC consolidates well under $58,400 highs.

After a violent price reversal last week that saw Bitcoin retreat from all-time highs, traders and analysts are now eyeing major players and investors to gauge BTC’s next move — and so far the reaction is decidedly mixed.

Data from on-chain analytics firm Glassnode indicates that the number of Bitcoin whales — a term for wallets that hold between 1,000 and 10,000 BTC — has at least temporarily reversed what was previously a strong uptrend starting in April 2020, a phenomena Glassnode labeled as a potential “end of whale spawning season.”

The Glassnode blog did make note that a "sizeable portion" of the decline may be attributable to custodial wallets restructuring, however. In fact, if some of the decline is related to custodians moving coins into deep storage, there’s an outside chance it could be a sign of more BTC moving into whale ownership, even the actual number of coins in whale addresses indicates otherwise. As a result, it may be difficult to label the decline in whale wallets to panic selling during crypto and macro market chop.

In a Tweet on Friday, Moskovski Capital CEO Lex Moskovski noted that Bitcoin miners — a frequent scapegoat for price dumps and boogeyman of cryptoTwitter — have actually begun accumulating coins as opposed to selling:

Yesterday was the first day since Dec, 27 when Miners Position change turned positive.

Miners were selling their bitcoins for two months.

Likewise, there appears to be good news in regards to institutional accumulation. Ki Young Ju, the CEO of CryptoQuant, noted that the quantity of BTC in exchange wallets continues to drop — a sign he believes points to continued institutional demand:

Another significant Coinbase outflows at 48k. US institutional investors are still buying $BTC.

I think the major reason for this drop is the jittering macro environment like the 10-year Treasury note, not whale deposits, miner selling, and lack of institutional demand. https://t.co/wzwkwMhJWx pic.twitter.com/1uEEF8SX5Q

However, some recent research indicates that the institutions hoovering Bitcoin may not have as much an impact on the price as originally thought. What's more, indicators suggest that retail mania has hardly even begun — a sign that the latest pullback may only be temporary, and the next push is where FOMO will really kick in.