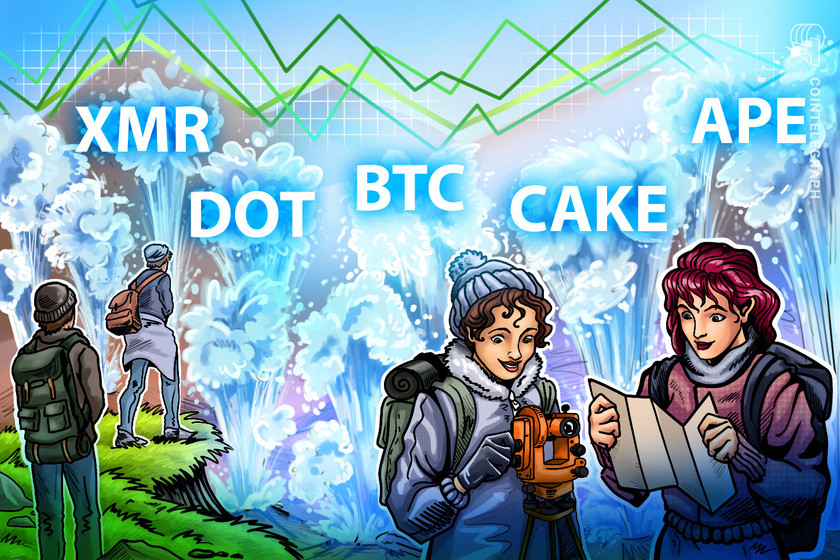 Bitcoin bulls are attempting to reclaim the $40,000 level and if this happens, DOT, XMR, APE and CAKE could be the first altcoins to break out.

Bitcoin (BTC) and several altcoins are trading in a tight range during the weekend, suggesting that investors are undecided about the next directional move. Traders may be waiting for Wall Street to open before placing large directional bets because Bitcoin has been tightly correlated with the S&P 500 in the past few days.

The sharp fall in the U.S. equity markets on April 22 suggests that investors are increasingly nervous about the hawkish stance of central banks. The market expects a 250 basis points rate hike by the U.S. Federal Reserve in 2022. In addition, the European Central Bank is expected to raise rates for the first time since 2011, according to a Reuters source.

Coinglass data showed that funding rates across crypto derivatives exchanges remained negative during the weekend, signaling a bearish bias. The failure to sustain a recovery has pulled the Crypto Fear and Greed Index back into the “extreme fear” territory.

Could Bitcoin attract strong buying at lower levels? If that happens, select altcoins could outperform to the upside. Let’s study the charts of the top-5 cryptocurrencies that show a positive chart structure.

Bitcoin broke below the psychological support at $40,000 on April 22 but the bears have not been able to build upon this advantage. The successive inside-day candlestick patterns on April 23 and April 24 suggest indecision among the bulls and the bears.

The 20-day exponential moving average ($41,150) is sloping down and the relative strength index (RSI) is in the negative zone, indicating that sellers have a slight edge. If bears sink and sustain the price below $39,000, the BTC/USDT pair could drop to the support line of the ascending channel. The bulls are expected to defend this level with vigor.

If the price rebounds off the support line with force, it will indicate strong demand at lower levels. The bulls will have to push and sustain the price above the 50-day simple moving average ($41,993) to indicate that the correction may be over. The pair may then attempt a rally to the 200-day SMA ($47,828).

Alternatively, if the price breaks below the channel, the selling could intensify further and the pair may drop to $34,322 and later to $32,917.

The 4-hour chart shows that the price is stuck inside a tight range between $39,177 and $39,980. This indicates that the bears are trying to flip the $40,000 level into resistance. The downsloping 20-EMA and the RSI in the negative territory suggest the path of least resistance is to the downside.

Contrary to this assumption, if the price turns up from the current level and breaks above the 50-SMA, the bullish momentum could pick up and the pair may rise to the 200-SMA.

Polkadot (DOT) has been trading near the overhead resistance at $19 for the past few days. This suggests that the bears have successfully defended the level but a minor positive is that the bulls have not ceded much ground to the sellers.

The marginally downsloping 20-day EMA ($19) and the RSI in the negative zone suggest that bears have a slight edge. If the price turns down and breaks below $18, the possibility of a drop to the strong support at $16 increases.

Conversely, if bulls thrust the price above the 50-day SMA ($19), the bullish momentum could pick up and the DOT/USDT pair may rally to the overhead resistance at $23. The bears are expected to mount a strong defense at this level.

The 4-hour chart shows the formation of a descending triangle pattern which will complete on a break and close below $18. If that happens, the pair could decline to $17 and later to $16.

Conversely, if the price turns up from the current level and rises above the downtrend line, it may invalidate the bearish setup. That could attract buying and the pair may rally to the 200-SMA.

A break and close above this level could signal advantage to buyers. The pair may then attempt a rally to $23.

Monero (XMR) is correcting in an up-move. The price turned down from $290 on April 22, indicating that bears are posing a strong challenge near the psychological level at $300.

The XMR/USDT pair could first drop to the 20-day EMA ($245) which is likely to act as a strong support. If the price rebounds off this level with strength, it will indicate that bulls are buying on dips. The pair could then again attempt a break above the overhead resistance at $300. If that happens, the pair may rally to $340.

Alternatively, if the price breaks below the 20-day EMA, the selling could intensify and the pair may slide to the 50-day SMA ($215).

The pair has dropped below the 50-SMA, indicating profit-booking by short-term traders. If the price continues lower and breaks below $250, the selling could accelerate and the pair may drop to $240 and later to the 200-SMA.

Any rebound is likely to face selling at the 20-EMA. The bulls will have to push and sustain the price above the 20-EMA to indicate that the correction may be over. The pair could then rise to $280 and later to $290.

ApeCoin (APE) broke out of the symmetrical triangle pattern on April 19, indicating that the indecision among the bulls and the bears resolved in favor of the buyers.

The 20-day EMA ($13.67) has turned up and the RSI is in the positive zone, indicating that bulls are in command. There is a minor resistance at $18.44 from where the APE/USDT pair turned down on April 23.

If the price turns up from the current level, the bulls will attempt to push the pair above $18.44. If they succeed, the pair could climb toward $20 and later to $24. This positive view could invalidate in the short term if the price turns down and breaks below the 20-day EMA.

The 4-hour chart shows that the pair turned down from $18 but rebounded sharply off the 20-EMA. This suggests that the sentiment remains positive and traders are buying on dips. If the price sustains above $17, the bulls will attempt to resume the up-move.

Although the rising 20-EMA indicates advantage to buyers, the RSI has formed a negative divergence suggesting that the positive momentum may be weakening. If the price turns down from the current level and slips below the 20-EMA, the selling could intensify and the pair may slide toward the 50-SMA.

PancakeSwap (CAKE) recently bounced off the downtrend line, indicating that the bulls had flipped the level into support. The price broke above the 20-day EMA and is attempting to reach the 200-day SMA ($11.52).

The 20-day EMA ($8.69) and the 50-day SMA ($7.71) are turning up gradually and the relative strength index is in the positive territory, suggesting that bulls have the upper hand. If buyers drive and sustain the price above the 200-day SMA, the CAKE/USDT pair could rise to $13.50 and later to $15.

Contrary to this assumption, if the price turns down from the 200-day SMA, it will suggest that the bears have not yet given up and they continue to sell on rallies. The pair may then drop to the 20-day EMA. If the price rebounds off this support, it will increase the possibility of a break above the 200-day SMA. This positive view could invalidate if the price breaks below the 50-day SMA.

The moving averages on the 4-hour chart have turned up and the RSI is in the positive territory, indicating that bulls have the upper hand. If the price turns up from the current level or the 20-EMA, the buyers will try to push the pair above the psychological level at $10. If they succeed, the pair could pick up momentum.

Contrary to this assumption, if the price turns down from the current level, the bears will attempt to pull the pair below the 20-EMA. If they do that, the pair may slide to the 50-SMA and later to the 200-SMA. A break and close below this support could suggest that the bears are back in the game.