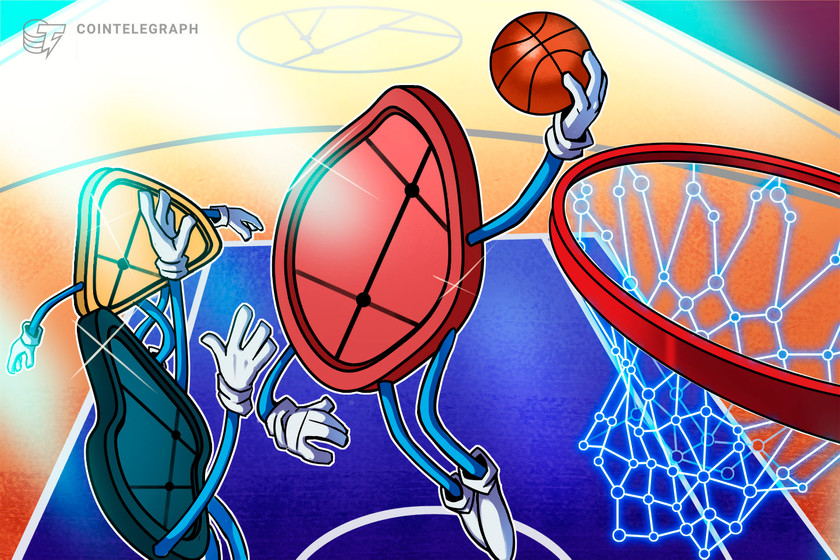 The collective sales volume of NBA Top Shot NFTs has dropped 99% from its February 2021 peak.

These collectibles are "Moments" — NFTs of NBA video clips and digital art — available per their degree of rarity. In other words, users can trade NFTs that feature anything from a winning three-pointe from Luka Dončić to a dunk from Lebron James, depending on their availability.

The concept is akin to traditional sports collectible where fans attempt to acquire the rarest of items associated with teams, with an aim to either collect or sell it later at a higher price. Except, in the case of NFTs, these collectibles are digital — unique cryptographic tokens that exist on a blockchain and theoretically cannot be replicated.

How does NBA Top Shot work?

NBA Top Shot is officially licensed by the NBA, the NBA Players Association, and Dapper Labs. The marketplace runs on the FLOW blockchain, which Dapper Labs built as a developer-friendly ledger to support "the next generation of games, apps, and digital assets."

As explained above, the NBA Top Shot platform functions like trading cards. It starts with the NBA licensing its reels and digital art to Dapper Labs. In turn, Dapper Labs uses the footage to create Moments as NFTs.

Each Moment has a unique serial number attached to it, which guarantees its authenticity and shows its rarity. In addition, the Dapper Labs team creates only a limited number of NFTs to ensure scarcity. As a result, the commonly available Moments are cheaper in valuation than the rarer ones. The NBA Top Shot website explains that:

An NFT is a one-of-a-kind, non-fungible, cryptographic token representing a unique digital asset for which there is no copy or substitute. An NFT cannot be substituted for another NFT as each NFT is distinctive and unique in some way. An NFT is not a medium of exchange and is not convertible virtual currency.

Each moment is secured by the blockchain, meaning your Moment is Unique and Licensed by the NBA and NBPA.

Moments come as a part of "Packs," similar to how traditional sports cards come in a bundle. In turn, packs are a part of the so-called "Series," which gets launched concurrently with the NBA season. So, fans can collect new packs of NFT moments that feature the season's best highlights.

In addition, fans can collect Moments from the past depending on their availability. For example, they can get Magic Johnson's dunk from May 16, 1980.

Collecting NBA Top Shot Moments is not a straightforward task. Typically, users do not know what Moments they will receive when they go ahead with a purchase, given the availability of each NFT depends on the the kind of set or Pack it comes from.

NBA Top Shot features four types of Moments: Common, Fandom, Rare, and Legendary. There is also a fifth category, called Ultimate, but this Moment is attainable only via auction. Anyway, here's how the other four categories work:

Dapper Labs groups the top shot Moments into Packs and presents them as Sets. These Sets come in two distinctive categories: Base and Non-Base. Here's how they work:

Challenges and Quests serve as a parallel avenue from where NBA Top Shot users can receive Moments, but as rewards not sales.

For instance, Challenges grant rewards to users who fulfil a given task in a specific timeframe. In detail, NBA Top Shot can launch a challenge with directives to collect a particular number of Moments in specific hours or days. Users who complete the challenge receive a freshly minted Moment.

Similarly, Quests offer rewards to users for finishing tasks, except the tasks are like scavenger hunts, wherein users are told to locate and build an exhibit for Moments with certain characteristics. As a result, Quests appear to be more difficult than Challenges and, therefore, return greater rewards.

A word of caution

The crash in demand came in line with similar drops across the NFT space with many leading projects, including Bored Ape Yacht Club and CryptoPunks, witnessing lower demand. As a result, some analysts rubbished the NFT market altogether, calling it a bubble.

Crypto collapsed alongside corps like FTX that were huge Ponzi schemes

As a result, venturing into NBA Top Shot space to speculate on its Moments remains a risky proposition and potential collectors should never invest more money than they can afford to lose.