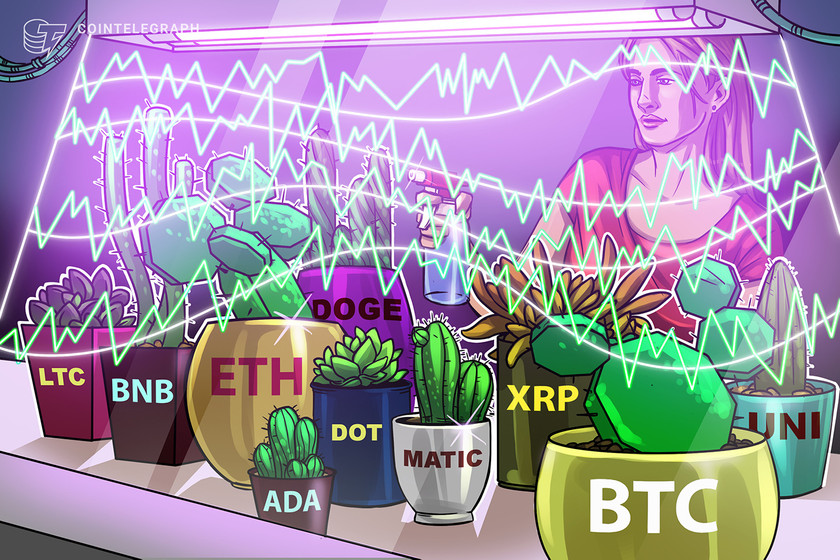 Bitcoin and most major altcoins are trading close to their overhead resistance levels, increasing the likelihood of an upward push.

Although cryptocurrency prices have seen deep cuts this year, traders have continued to plow money into the space. An online survey conducted by Blockchain.com shows that 41% of the respondents bought crypto this year and 40% plan to purchase crypto in the next year.

However, a sustained recovery in risk-assets may happen only after inflation shows signs of cooling. That would raise expectations of a pivot by the United States Federal Reserve from its aggressive monetary tightening to an expansionary policy.

In the short term, markets may remain volatile as the volumes are likely to remain thin during the holiday season. Could Bitcoin and altcoins start a recovery? Let’s study the charts of the top-10 cryptocurrencies to find out.

Bitcoin is trying to cling to the 20-day exponential moving average ($16,955). The bears tried to pull the price lower on Dec. 22 but the long tail on the candlestick shows strong buying on dips.

The bulls will try to clear the overhead hurdle at the moving averages. If they succeed, the BTC/USDT pair could pick up pace and soar to the strong overhead resistance at $18,388. This is an important level to watch because a break and close above it could attract huge buying. The pair could then surge to $21,500.

If bulls fail to push the price above the moving averages, it will suggest a lack of demand at higher levels. The bears will try to make use of this opportunity and pull the pair below $16,256. If they do that, the pair could plummet to the support at $15,476.

Ether’s (ETH) bounce off $1,150 is facing strong resistance at the 20-day EMA ($1,230) for the past two days. Sellers tried to pull the price down on Dec. 22 but the long tail on the candlestick shows aggressive buying at lower levels.

The 20-day EMA is flattish and the RSI is just below the midpoint, indicating a balance between buyers and sellers. A break above the 50-day SMA ($1,259) could tilt the near-term advantage in favor of the bulls. The ETH/USDT pair could then climb to $1,352.

Sellers will have to sink the price below the immediate support at $1,150 to gain the upper hand. Such a move would complete a bearish head and shoulders pattern in the near term. The pair could first drop to $1,075 and then plunge to the target objective of $948.

BNB (BNB) has been consolidating near the breakdown level of $250 for the past few days. This suggests that bears are protecting this level but a positive sign is that the bulls have not given up much ground.

If the price rises above $255, it could trap several aggressive bears who may then hurry to close their short positions. That may result in a short squeeze, which could push the price to the 50-day SMA ($283) and then to $300.

Instead, if the price turns down from the current level and slides below $236, it will suggest that bears remain in control. Sellers will then try to sink the price below $220 and extend the decline to the psychological support at $200.

XRP (XRP) is trying to start a recovery but that could face selling near the breakdown level of $0.37. Both moving averages are sloping down and the RSI is below 40, suggesting that bears have the upper hand.

If the price turns down from the 20-day EMA, the bears will try to pull the XRP/USDT pair below $0.33. If they manage to do that, the pair could drop to the critical support at $0.30, which the bulls will likely try to protect.

Another possibility is that the price turns up from the current level and buyers drive the pair above the overhead resistance at $0.37. If that happens, the pair could rally to $0.41, which may again behave as a major obstacle.

Dogecoin (DOGE) rebounded off the strong support at $0.07 on Dec. 20 indicating that buyers are trying to defend this level with vigor.

The pullback could reach the downtrend line where the bears may mount a strong defense. If the price turns down from this level, it will increase the likelihood of a break below the support at $0.07. If this level cracks, the selling could accelerate and the DOGE/USDT pair could drop to the vital support at $0.05.

Contrary to this assumption, if buyers thrust the price above the 50-day SMA ($0.09), it will suggest strong demand at lower levels. The pair could then rally to $0.11, which may again act as a strong barrier.

Sellers tried to sink Cardano (ADA) below the support line of the falling wedge pattern on Dec. 21 and 22 but the bulls defended the level successfully.

Buyers are trying to propel the price to the 20-day EMA ($0.29). This level may act as a major barrier but if bulls overcome it, the ADA/USDT pair could rally to the 50-day SMA ($0.32) and then to the downtrend line.

Contrarily, if the price turns down from the current level, the bears will fancy their chances and attempt to sink the pair below the support line. If they can pull it off, the downtrend could extend to the psychological support at $0.20.

Polygon (MATIC) is attempting to start a relief rally but the bears are in no mood to relent. They are offering a stiff resistance near $0.81 but the long tail on the Dec. 22 candlestick shows that bulls continue to buy the dips.

Sellers may again try to stall the relief rally at the 20-day EMA. If the price turns down from this level, a retest of $0.76 is possible. Conversely, if buyers thrust the price above the 20-day EMA, the pair could attempt a rally to the 50-day SMA ($0.90).

Polkadot (DOT) slipped below the $4.40 support on Dec. 22 but the bears could not sustain the lower levels as seen from the long tail on the candlestick. This indicates buying at lower levels.

The bulls will have to sustain their buying and push the price above the 20-day EMA ($4.92) to indicate strength. The DOT/USDT pair could then move up to the 50-day SMA ($5.45) and later attempt a rally to the downtrend line.

On the contrary, if the price turns down and breaks below $4.37, it will suggest that the downtrend remains intact. The pair could then drop to $4. The downsloping moving averages and the RSI near the oversold area suggest that bears are in command.

Litecoin’s (LTC) recovery is facing resistance near $67. The failure of the bulls to push the price to the moving averages shows that bears are selling on every minor rally.

The moving averages are on the verge of a bearish crossover and the RSI is in the negative zone, indicating advantage to bears. If the price turns down and breaches the support at $61, the LTC/USDT pair could plummet to $56.

If bulls want to invalidate this negative view, they will have to push and sustain the price above the moving averages. The pair could then attempt a rally to $75 where the bears may again mount a strong resistance.

Uniswap (UNI) is trading in a tight range between the support line of the symmetrical triangle and $5.50. This suggests that bulls are buying the dips but have been not able to clear the overhead hurdle at $5.50.

The downsloping moving averages and the RSI in the negative territory indicate an upper hand to the bears. If the price turns down and breaks below the triangle, the UNI/USDT pair could plunge to $4.60.